Why do the 5th and 6th officials need magic wands, and what do they do?

The 5th and 6th officials (if that's what they're called) that run the goal line in Euro 2012 can be seen holding "wands" in their hands; 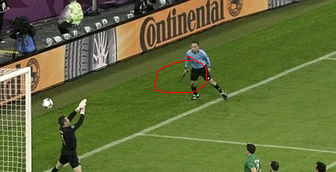 Does anyone know what they are?

The wands that we are seeing more commonly in football are known informally as "Buzzer Flags" or, more correctly, "Referee Paging Systems". 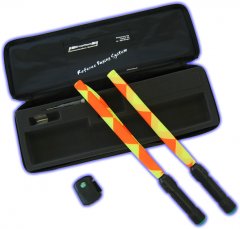 These are designed to alert the referee to his other officials, one of which may need to bring something to his attention.

In making this alert, the referee's armband or transceiver unit will vibrate and possibly also make an audio alarm in his earpiece. The devices can be configured so that each official has a different audio tone so that the referee knows which assistant is paging him.

This technology works alongside the open communication system also adopted by the officials.

[This system] allows conference-type communications between 2 to 6 users over 1 km (no limit for the amount of receive only units). The main innovation of the system is the “ open microphone” communication concept; it allows every user to talk when they want, without waiting for their turn and without needing some accessory to start talking (push-to-talk button, Vox system).

Now, you'll notice from the image I posted that the buzzer flags look like ordinary assistant flags. In your question, you ask why the 5th and 6th officials have these wands.

What you'll actually find is that all of the officials are adopting these pager and communication systems. The 5th and 6th officals' wands look more like simply flag-handles. This is because there is nothing in the laws of the games catering for flag signals by these two goal-line assistants - therefore they don't have the yellow and red flag fabric on them.

The assistant referees will accompany their paging by the mandated flag signal as well.

The stick he's holding is a buzzer,
When he press on this "Wand" then main referee feels vibration and he knows that the 5th or 6th officials wants to signal him on something.

I will look for a reference later on..

Not the answer you're looking for? Browse other questions tagged football euro officiating or ask your own question.

18
Why did Greece go through over Russia in Euro 2012?
9
How does UEFA spend its profits from broadcasting rights?
8
What do Spain get for winning Euro 2012?
9
What is the “Magic Spray”?
5
UEFA Champions League Goal Line Officials Position on the Field
8
What is the shield-like gear the umpires are wearing at the IPL?
6
What are the roles of the various officials in badminton?
1
What are the duties performed by the match officials before the start of a match?
3
In football, what happens when a team commits an offence for which play need not be stopped, and then scores a goal immediately after?