Does the Daytona International Speedway have more crashes than other tracks?

I'm watching the coverage of the delayed Coke Zero 400 on NBC, and as I write this, the race is about to begin. The commentators seemed to suggest that drivers are much more likely to experience crashes at Daytona then they are on other tracks. Is this true? If so, why?

Admittedly, the start of the race has been delayed for a while now, and the commentators are probably running out of things to say. I know very little about NASCAR, so I have no idea if it is true or not.

I'm actually having a really tough time finding stats for this, which is kind of odd given the public's propensity for crashes. The best I've been able to find is this USA Today article, which takes a look at crashes throughout the 2009 season. It also includes an infographic breaking down crashes by track for the season: 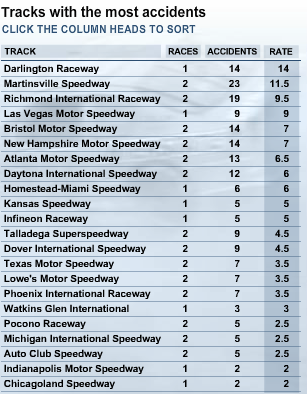 As you can see, Daytona is relatively average when it comes to crash rate. The article says:

"Not surprisingly, Martinsville Speedway, Bristol Motor Speedway and Richmond International Raceway, the three shortest tracks on the circuit, recorded the most crashes and spins in 2009."

It seems the shorter tracks tend to have more crashes, which I suppose makes more sense given that most passes occur during/coming out of a turn.

Not the answer you're looking for? Browse other questions tagged auto-racing nascar or ask your own question.

21
Why does safety car start at the end of the racing grid?
1
Formula 1: How does Sprint Qualifying affect the starting grid on race day?