How to recognize baseball pitches when watching television games?

When I watch Baseball games on TV, I have trouble to identify the pitch that the pitchers are throwing. I know the pitch types but can't tell the difference of a fastball to a slider when watching games on TV.

I usually play baseball video-games, and I can easily identify the pitches when playing. I can tell if it is a slider, fastball, change-up and so on, but I have trouble when watching television.

Here are some things to look for while watching on television:

it's also possible sometimes to tell from arm position and angle but most professionals (even those on the bench) are good enough to make every pitch look the same in terms of release angles. However, sometimes when a pitcher loses his feel and the mechanics start to break down.

So watch the pitcher, and listen to the scouting report. He probably only has 3-4 pitches he throws as a starter, and 2-3 as a reliever.
Normally it will be a choice of Fastball, Slider, Cutter, Splitter, Sinker or a Knuckleball. There are more but these are rare.

Once the pitch has been released and is in flight, here are some ways to distinguish a pitch (assuming a right-handed pitcher, which you can most likely invert for a lefty): 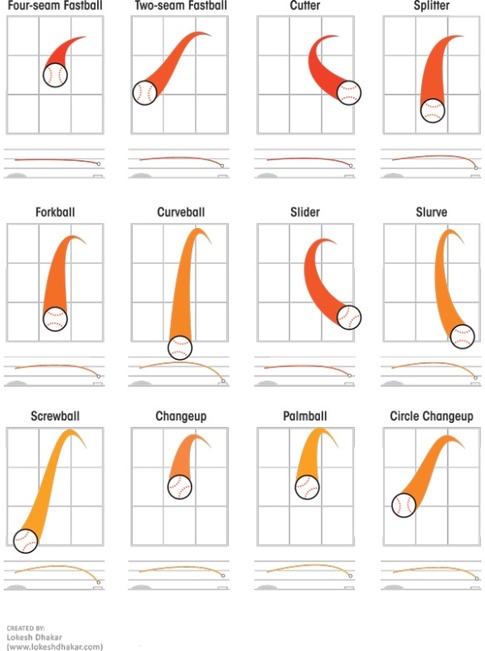 You're not alone; sometimes even the commentators, who have the same "over-the-shoulder" long-lens view that the folks at home do, will simply refer to a pitch as a "breaking ball" if it drops sharply or curves outside, even though a number of specific pitches can do that.

The fundamental theory of pitching is that the batter gains an advantage over the pitcher proportional to his ability to predict the pitcher's next move, and conversely, the pitcher gains an advantage over the batter inversely proportional to the batter's ability to predict the next pitch. Your better pitchers have a number of weapons to accomplish this, but key to all of them is control over three elements of the pitch; speed (and thus timing), vertical axis (drop), and horizontal axis (slide).

From the very good diagram Dor linked to, here's a basic breakdown of the most common RHP's pitches as seen by a RHB:

The variation of speed and breaking action produces a host of possibilities, which a good battery can use to keep the batter guessing. A pitcher can also aim pitches differently to make them look like other pitches; a pitcher can throw a fastball high and fool the batter into thinking it was going to be a sinker or splitter, or can throw a two-seam wide and the batter may think it's an errant four-seam until it breaks back over the plate.

Batters like a variety of different pitches; exactly what the batter likes should be known by the pitcher and/or catcher, and a combination of what the batter flat doesn't like, and pitches that look like what he does like but then change, are generally the order of the day. From time to time a pitcher may give a batter exactly what he wants, hopefully when he's least expecting it; this is often necessary to avoid showing the batter the same pitch too many times, and a missed opportunity can also put the batter "on the tilt", throwing off their concentration as they mentally kick themselves.

I think hitters who train to recognize spin-speed and shade have a huge advantage in recognizing pitch types, especially early right after release point.

I've heard some pretty credible hitting instructors touch on the idea of posting up in the zone to recognize breaking balls left up in the zone.

As a viewer watching various pitch types, I doubt you'd be able to see spin-speed but seeing how the ball pops out of the hand is definitely something you can see from a views POV.

This article touches on it a bit.

Lastly, if you're looking for clues as a viewer, where the catcher sets up can tell what the pitch type was.

Off-speed breaking ball pitches will usually have the catcher set up on the outer half of the plate.

Not the answer you're looking for? Browse other questions tagged baseball media pitching or ask your own question.

5
How could pitchers once pitch both games of a doubleheader?
6
Why are there so many pitcher types in baseball?
12
Why can't modern starting pitchers consistently pitch on 2-3 days rest?
4
Pitchers as MVP
12
Do teams announce their exact formations before a match?
8
Why is the stretch preferred over the wind-up?
2
Electronic Assistance in baseball
4
Sign stealing in baseball