Can a back row setter reach into the plane to play the ball?

This is the ball position where the back row setter makes contact. 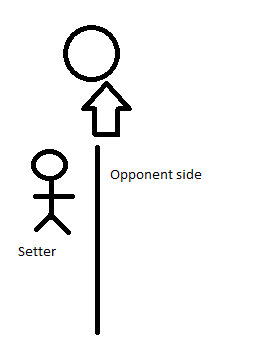 (Edited per amended question. TL;DR: the setter made a fault of “reaching beyond the net”, signalled by the referee by a hand placed above the net, palm facing downwards.)

There are two issues when a back-row player sets near/above the net:

But if the back-row setter touches the ball within his own playing area (or, theoretically, above the free zone, if the ball is overflying the net partially or completely outside the antennae), and plays it “backwards” into his own half of the court or parallel to the net or his teammate touches the ball prior to the ball crossing the net completely and prior to any blocking opponent touching the ball, it is valid play.

9: Each team must play within its own playing area and space

11.4.1 [Player’s faults at the net] A player touches the ball or an opponent in the opponent's space before or during the opponent’s attack hit.

13.1.3: An attack hit is completed at the moment the ball completely crosses the vertical plane of the net or is touched by an opponent.

13.2.3: A back-row player may also complete an attack hit from the front zone, if at the moment of the contact a part of the ball is lower than the top of the net.

13.3.3: [Faults of the attack hit] A back-row player completes an attack hit from the front zone, if at the moment of the hit the ball is entirely higher than the top of the net.

Team A’s setter hit the ball above the net so that at the moment of the hit his/her fingers were in the opponent’s space. After the set the ball flew parallel to the net toward an attacker. The blocker of team B touched the ball in team’s A space, so that the team A player could not execute the attack hit. How should the 1st referee decide?

A back row setter jumped from within the attack zone and set the ball while it was completely above the height of the net, directing it towards an attacker. Before the attacker could contact the ball, it penetrated the vertical plane of the net where it was blocked by the opponent’s setter. Was there a fault?

Yes. The set became an illegal attack hit by a back row player when the attack hit was completed (in this case by contacting the opponent’s block). The rally should have been won by the opponents.

This depends on exactly which part of the ball is played. The fundamental rule here (which applies equally to front row and back row players) is Rule 9:

Each team must play within its own playing area and space

17
What constitutes a legal block in volleyball in regard to it not counting as the first hit?
4
Contact of a player with the net
2
Volleyball: Can an attack hit be considered a block
3
Can an intercepting player be down by contact that occurs before the interception?
4
Base running after being awarded two bases
1
Can a back row player joust at the net without jumping?
2
Two-handed "attack" return on a serve?
5
Tennis: Ball In or Out? Hawkeye vs Frame-by-Frame Video
2
Will this be judged as a legal catch or not? Can a fielder juggle the ball outside the boundary, such that each time he touches ball, he's in the air?
4
Is it legal to hit a shuttlecock around the net posts in badminton?