What is the highest two-man stat line from teammates in NBA history?

Does anyone know what the best two person line has been in history? Or how I might go about finding out myself?

I would look at the early 2000s Lakers with Shaq and Kobe. They were both putting up close to 30 per game for a season or 2.

Your question could be taken to mean a few different things though. Highest combined PPG, highest points and assists average, points and rebounds, highest total statistical output. Which in using each of those, it could change the answers alot. You could look at Moses Malone and Dr. J from about 82' to 86', Jordan and Pippen in the 6 90s seasons they were both on the court for Chicago, Shaq and Kobe like i said, Duncan and Robinson from 97' to 00' or so, Jabbar and Magic in the early 80s, Jabbar and Adrian Dantley in the late 70s, likely enough Wilt with Jerry West and/or Elgin Baylor in the late 60s/early 70s. Lebron and D-wade from 10' to 14' i bet too. To do this go to BasketballReference, go down to Team Stats for the given year and you can see it all as needed.

Stephon Marbury and Steve Francis put up like 75 shots a game while playing together with the Knicks. 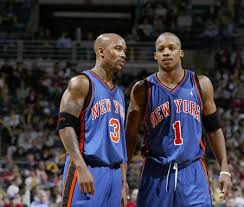 Not the answer you're looking for? Browse other questions tagged basketball statistics history nba or ask your own question.