Why did a swimmer wear a swim cap with someone else's name?

On 29 July 2012, in the 200m freestyle qualifying heat, Nimrod Shapira Bar-On (from Israel) wore a swim cap with another person's name. 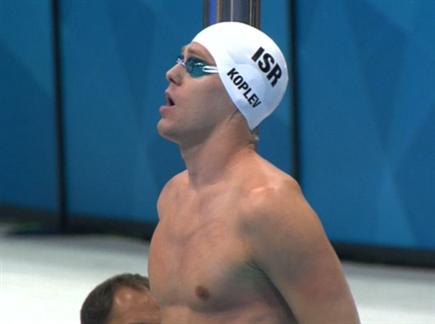 Nimrod Shapira Bar-On came second in his qualifying heat in the 200m freestyle, Shapira Bar-On had put Jonathan Koplev‘s name on his swim cap – Koplev was supposed to participate in London-2012 Olympic but had his appendectomy burst and made ​​him stay home (Source).

The first reason you can think about is a gesture of Nimrod Shapira Bar-On to Jonathan Koplev but surprisingly it's not the reason.

The real reason was that Nimrod didn't get a swim cap with his name and chose to wear Koplev‘s swim cap.

IOC's (Israel Olympic Association) response: "Something like this should not happen. Speedo company sent a letter with a severe reprimand demand explanations, and comprehensive investigation we will with our return to Israel. Most sincere apologies to Nimrod."

Israel Swimming Association chairman, Noam Zvi: "Speedo not made ​​him a cap with the name. Only two days ago we realized there was a problem. We tried to organize a union cap soon, but have fallen short. "

"Speedo" response: "The company has provided sets of clothes for five swimmers that it adopts, and Shapira Bar-Or is not one of them. Speedo company does not adopt the Swimming Association and is not committed to providing swimmers equipment. Name of the swimmer Shapira Bar-Or was in the list forwarded to us from an association swimming, but since there were no dimensions, and there was no liability to pay, a cap with his name was not printed in. as a goodwill gesture Shapira Bar-Or received a late-model caps in London without a print of his name."

Not the answer you're looking for? Browse other questions tagged equipment olympics swimming or ask your own question.

43
Why do some swimmers wear two caps?
10
More swimming, or alternative activities/sports for a junior competitive swimmer?
4
Swimming pace - where should I be and what should I do?
8
Why is racquet abuse banned in tennis?
7
Why do runners wear helmets?
5
Player's name on uniform: when and why did it start?
0
Did Eric Moussambani go to the semi-finals in Sydney?
1
Why do swimmers wear headphones?