How are gymnastics routines scored?

In scoring routines in gymnastics, there is "theoretically no limit to the score a gymnast can achieve." However, the highest score judges can award for the execution of a routine is 10. Furthermore, "17" and "perfect 10" are often synonymous.

A summary of the scoring system in gymnastics: 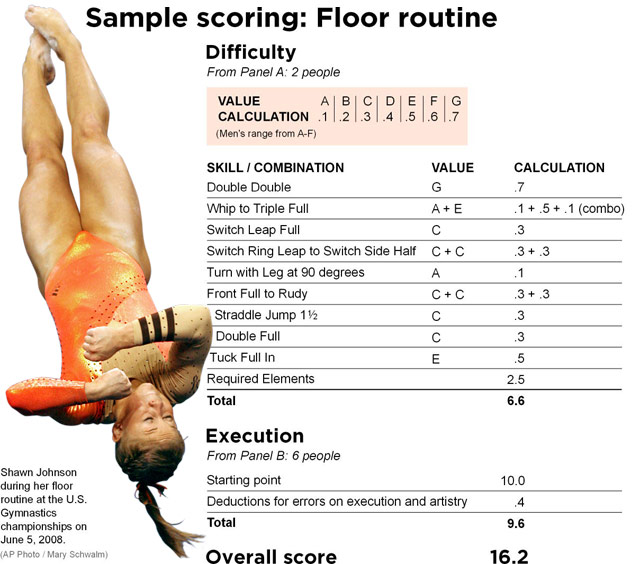 You've covered most of the points but I'll try to add a bit of explanation around them now.

The scoring system is governed by the Code of Points.

The codes were overhauled in 2006 (following controversy in the 2004 games). Previously, perfect 10 was the best that a gymnast could score.

10 is the absolute maximum that can be awarded for execution. The judges start at 10 and then deduct an amount for each error such as wobbles, balance issues, extra footsteps etc.

In addition to the execution (E) score, there is a separate panel of judges scoring the difficulty (D) score. This comprises of three elements: Difficulty Value (DV), Composition Requirements (CR) and Connection Value (CV).

The D-score (or Difficulty score) evaluates the content of the exercise on three criteria: the Difficulty Value (DV), Composition Requirements (CR) and Connection Value (CV).

So, with that scoring system, there is no upper-limit to the number of points that a gymnast can accumulate on the D-score.

As for gymnasts who have scored (or attempted to score) more than 7.0, I can think of the following:

If you fancy trying Liukin's routine yourself(!) it is:

16
Why are forfeits in baseball scored as 9-0?
1
How to have a checklist to show your athletes?
5
In Olympics gymnastics competition, what are the requirements to compete for a Country?
3
How are the disability definitions scored in the Paralympics
0
How to prevent a bad flip in Gymnastics?
1
How are women gymnasts performing with long nails?
0
Gymnastics Lunge Position, Hand position
0
Men undergarments with Gymnastics shorts question