How can an NFL team with a worse win-loss record than a division rival clinch a playoff berth before their rival?

As of week 16 of the 2015 NFL season, the top two AFC West teams are the Broncos and the Chiefs. Specifically:

Notice the x next to the Chiefs indicates they have clinched the playoffs. So they could go 10-6 and still make the playoffs. But with two games left, the Broncos obviously could at worst wind up going 10-6. So both can go 10-6. Why is KC in but not Denver?

Currently no other wild card team seems to have a chance of attaining a better record than 10-6. As you can see from this table, 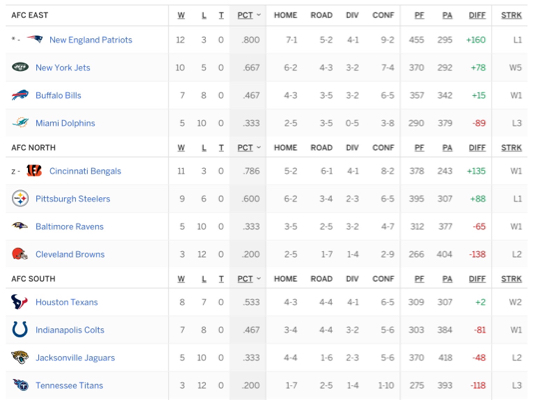 the Jets and the Steelers are the only two teams who have a chance to go 10-6. Also note, both of these teams have larger net total points than the Broncos.

TL;DR: the good divisional record (at worst 4-2) and excellent conference record for the Chiefs (at worst 9-3) means that they win the tiebreakers over the other relevant teams (Broncos, Jets and Steelers).

How the Broncos can miss the playoffs

The Broncos lose to both the Bengals and the Chargers, while the Chiefs beat the Raiders. The Chiefs win the AFC West with an 11-5 record, while the Broncos are in the wild card mix with a 10-6 record.

Why the Chiefs always make the playoffs

If the Chiefs win their final match, they are 11-5. At this point, they are either AFC West champions or guaranteed to have one of the two best records of non-champions (the only other non-champion which can possibly get to 11-5 is the Jets), so they are guaranteed a playoff spot.

If the Broncos win one of their final two matches, they are 11-5 and AFC West champions, while the Chiefs are in the wild card mix. The important teams are once again the Jets and the Steelers - if they both win, the Jets again claim the first wild card spot at 11-5, and the Steelers are at 10-6. The Chiefs win the tiebreaker on the basis of their better conference record (9-3 vs 7-5). A similar analysis applies if the Jets lose.

10
How do NFL teams do in their last game if they have already clinched a playoff spot?
15
NFL division with all teams having a losing or winning record
7
Has an NFL team ever won their division with a losing record within the division itself?
11
How can an American football team tie with another team?
5
Number 5 seeds hosting NFL conference championship game
7
Why are NFL players introduced with their college team?
2
How are NFL division titles determined when a team has best record within division, but not in overall games?
1
Highest record a nfl team can get and miss the playoffs
1
Since the NFL changed to the 6 team playoff format, what is the best and worst record for each rank 1-6?
2
Why don't NFL teams keep a punter who can kick field goals?