Football field: Defensive goal line "plane" is actually the back of the painted line?

In the NFL and presumably in most football leagues, the goal lines, yard lines, and hash marks are all four inches wide. The hash marks/yard lines are painted at 36-inch intervals; that is, they are 32 inches apart so that they mark exactly one yard each. Easy enough.

However, doesn't this make the field between goal lines exactly 99 yards and 32 inches from goal line to goal line? It is less than one hundred yards, right?

Come to think of it, this would be consistent with how balls are spotted. On a touchback, for example, the ball is spotted with the nose just kissing the back edge of the 20-yard line. Thus a ball spotted at the one-yard line would just kiss the painted hash mark, and so a ball spotted at the one-inch line would be three inches behind the front of the goal line, which we normally think of as "in the end zone," but it must not be so.

I suppose it would only matter in the question of a loss of yards from scrimmage or a terrible kick return within four inches of the goal line. If a ball carrier is down by contact with the nose of the ball spotted three inches behind the front plane of the defensive team's goal line, this must not be a safety/touchback, right? That is, the ball can be spotted for a play from scrimmage with its nose at three inches behind the front of the painted goal line (one inch from the back of the painted goal line), from which the offense would have to advance 99 yards and 35 inches for a touchdown. Is this right?

A touchdown is actually when a ball is on, above, or behind the plane of the goal line. So to answer at least a part of the question, as soon as the ball goes into the white line at all, it's a touchdown.

A safety is basically the inverse of this. The ball is considered in the end-zone until the entire ball is in the field of play (beyond the plane of the white line of the end zone.) So if the spot of the ball leaves any part of the ball on the white line at all, it's a safety. That is my interpretation at least.

I've been using this resource: http://operations.nfl.com/the-rules/2015-nfl-rulebook#section-5-safety

In the NFL and presumably in most football leagues, the goal lines, yard lines, and hash marks are all four inches wide.

Inbound lines are that way, but the goal lines are eight inches wide.

The hash marks/yard lines are painted at 36-inch intervals; that is, they are 32 inches apart so that they mark exactly one yard each. Easy enough.

However, doesn't this make the field between goal lines exactly 99 yards and 32 inches from goal line to goal line? It is less than one hundred yards, right?

The NFL plan drawing from the rulebook shows the goal lines and end lines (thick white lines) are outside the dimensions of the playing field (thin black lines). 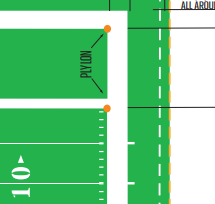 While the yard lines on the field are centered. 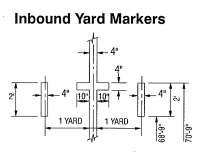 One of the very first rules of the game is this: "The game shall be played upon a field 360 feet long" And both ends of the football matter as far as spotting. That is why it must just barely cross the end zone to be a touchdown, and why it must completely cross from the end zone out so as not to be a safety. I think those are all agreed upon. The problem is with the 50=yard line. It is 50 yards from the far side of it to each end zone, making the field of play 4" shorter than 100 yards.* And that is the irony since Rule 1 says it must be 100 yards (360').

Not the answer you're looking for? Browse other questions tagged rules american-football or ask your own question.

4
Three Point Field Goal Point of Release
10
Requirements for Touchdown Catch Near the Goal Line
6
American football delay of game
4
What is the significance of the 20 yard line?
1
Can a 5-yard penalty be conceded by the defence when the offence is less than 5 yard from the goal line in American football?
3
Can an intercepting player be down by contact that occurs before the interception?
12
What determines the spot of a field goal kick in the NFL?
3
Who is awarded the sack when a player is not actually tackled?
2
Is an infinite game possible?