Are there other similar badges in football?

In Italy when a team win its 10th Championship (Serie A), they can put on the shirt a star so

This is not an official recognition but it is commonly recognized.

Are there other similar badges in football?

Yes, such an aspect is common amongst in football on both the club and national level. While some leagues have official rules on the matter, such as the Champions League (where a "Multiple-Winner Badge", seen below, is rewarded for any club winning the Champions League five times or three consecutive), while others are far less formal. It's not uncommon for these rules to be loosely enforced as well; the equipment regulations for FIFA competitions, section 18.2 states:

"Those Member Associations that have won the FIFA World Cup may put a symbol on the playing shirt representing this accomplishment and the number of times won.

However, Uruguay's national team wears four stars (for their two World Cup victories and their two Olympic victories before the World Cup began, which they recognize themselves as Championships), and are allowed to get away with it.

In the end, unless there is a codified rule in place and enforced, like the Champions League badge, many of the stars are placed on uniforms by the club at their own behest, depending on what titles a team feels are significant. Occasionally this may adhere to an accepted standard such as the one mentioned in your question, but the club or nation does not necessarily have to take into account anything other than what they want to display on their kits. 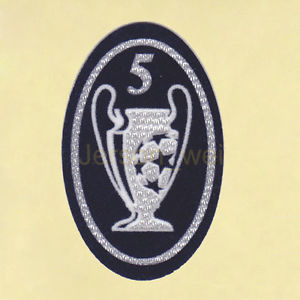 Often those things are not really sanctioned by any authority, and are decided by teams themselves. For example, Glasgow Rangers in 2003 decided they will have five stars on their shirts to represent their 50 titles, while Celtic's single star symbolises their victory in the 1967 European Cup.

In Germany, they have a Verdiente Meistervereine system, where teams get one star for 3 titles, two stars for 5titles, three stars for 10 titles, and four stars for 20 titles. So, for example, Bayern won 28 titles so they can show four stars on their shirts.

Not the answer you're looking for? Browse other questions tagged football trivia history serie-a or ask your own question.

6
How numbers are assigned to football players?
9
What other sports have an offside rule other than football?
5
Are there reports of Luis Suárez biting other players (but not getting caught)?
19
Are there any sports that started as a women's sport?
6
Tie breaking in association football championships
5
Are there any goals scored by a referee?
3
Are there any other instances of a coach's challenge backfiring?
4
How many potential different endings are there for a football match?
1
Why do Italian football teams tend to be so different to teams in other countries?