Was Kobe Bryant's 60 points in his last game comparable to his performance during his career? [closed]

I was wondering if there was any evidence to show that those 60 points were a tribute reserved for him for his immense career. Did he receive a much higher percentage of assists or passes than usual? Or are there any statistics to instead show it was driven by spectacular performance and adrenaline from his final game?

I do not think he was "helped" by his opponents but I was not able to see the match.

I've got no particularly interest in what the game was, but dug into the stats a bit... a couple good ones that stand out from this SB Nation article:

Based upon basketball-reference he was only averaging 25 shots per 42 minutes (how much he played tonight) and 11 3s before the night. So it was definitely a much heavier shooting night for him. From the team page on B-R, the Lakers averaged 18 assists per game this year... and had 19 tonight. So it wasn't necessarily that he absolutely had the ball the whole time... though it certainly also wasn't that the team was creating more open looks than normal for him. Interestingly the Lakers also average 84.6 shots per game and only took 85 tonight. So it wasn't they rushed the tempo to make it happen happen. The team as a whole wasn't just chucking up a ton more shots... just more of them were in Kobe's hands.

There are some more interesting details at the NBA's Player Tracking page that show more of a breakdown of Kobe's game this year. He'd expect to:

Unfortunately didn't find so much data from this game. Best I've got is: 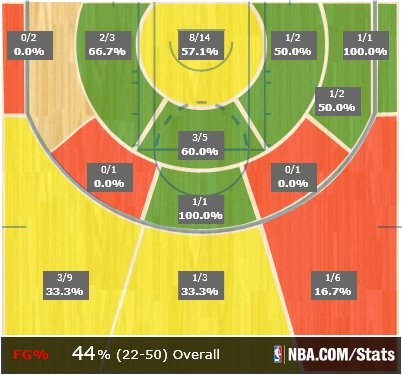 and that the play-by-play shows Bryant's shots being listed as pullups 12 times tonight. If anyone has any access to better stats from tonight's game, that'd be great to compare to. But while he chucked a ton of threes... he also scored a lot inside tonight. And from the few highlights I saw, they were reasonably contested shots. So it probably wasn't quite just catch and shoot ball, despite the insane number of shots.

Coincidentally, the Lakers did shoot 48% on the night, quite a healthy number (41% is their season average). So their offense was working reasonably. Kobe took a lot of shots, and his 44% FG was fair, but he also allowed the rest of the team to get off real quality shots (or they just had a lucky night?) playing this way. The offense running well when Kobe shot a lot... that's what I think we all remember his championship teams were known for.

Coincidentally, the Jazz were the 9th best defensive efficiency team this year [Sporting Charts]. So generally a good D. That the Jazz' six 10+ ppg guys played 63 minutes less tonight than they did against the Mavs Monday is noticeable. And on defense, specifically noteworthy is that starting SG Rodney Hood... the Jazz' only guard [still with the team] forcing a lower shooting percentage to the players they guard compared to their average... only played 18 minutes tonight, compared to 34 on Monday. And certainly cannot forget, the Jazz were eliminated from the playoffs shortly before the game. So the perfect storm for a passionate Kobe against a heartless Jazz, certainly.

Still, you'd think if it really was just the Jazz playing poor defense, whether against Kobe to honor him, or in general just as a product of the situation... the Lakers would've ended up shooting more (and probably better). The Jazz led almost the entire game. So it doesn't seem they just absolutely failed to show up entirely. The Jazz gave up 95.9 ppg while averaging 97.7 this year. The Lakers gave up 106.9 ppg while averaging 97.3 this year. Final score 101-96 The Laker D was the big surprise. And so it doesn't really seem the numbers support that the Jazz gave the Lakers huge favors by playing much take-it-easy-defense.

But you can analyze single game stats to death, not sure you can ever make absolutely definitive judgements on them.. but the suggestion seems to be that while the deflated Jazz team (and slightly weaker roster) played some part... it was probably more that Kobe took control of the ball a bit more tonight, and played with a passion a bit more like the "good old days".

Consider this: Tonight he shot 44%. That was below his career average. But this year, he only had 13 better shooting games. And 47 worse ones.
So, it was really Kobe of old.

Not the answer you're looking for? Browse other questions tagged basketball statistics nba or ask your own question.

3
Has any information come out that clarifies how sick Jordan was during his famous "flu game"
1
Was Larry Bird the first basketball player to wipe his sneakers during games?
0
When was the last time a kicker was released after making two 60+ yard field goals during the season?