In short, "Strokes Gained" is a value of a golfer's performance compared to the average performance of other golfers.

Does "Strokes Gained: Tee-to-Green" objectify tee-to-green performance? Is there any correlation between this statistic and the ball striking statistic† + scrambling statistic, its individual parts, or other statistics?

Note: The ball striking statistic and the scrambling statistic doesn't compare to the average performance of other golfers, but does objectively capture driving distance, accuracy, greens in regulation, sand saves, and other around the green recoveries.

For example, Lucas Glover is 1st in Ball Striking, 65th in Scrambling, and 45th in Strokes Gained: Tee-to-Green thus far during the 2016 PGA Tour season. 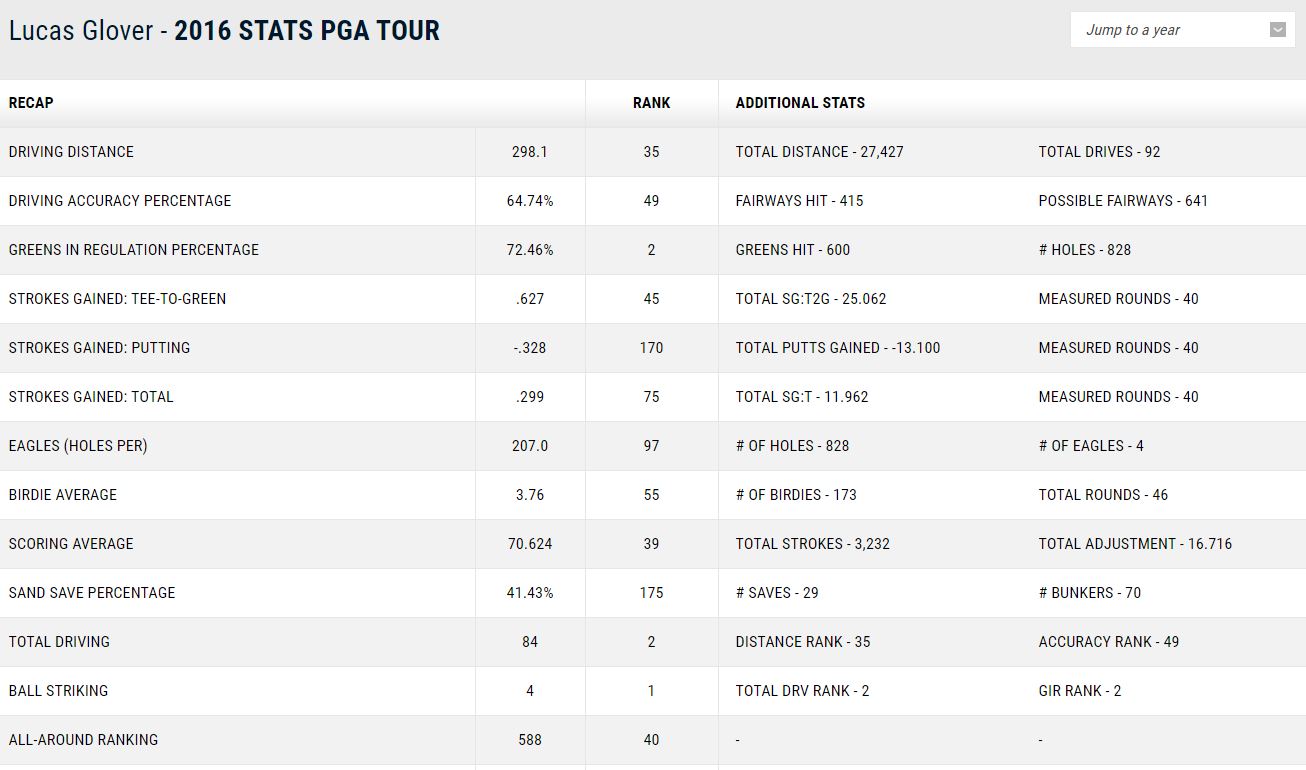 In theory, there is no reason why the definition of SGputting cannot be extended to the entire hole.

So given the definition on the green that

The average number of putts used to hole out from 7 feet 10 inches is 1.5.

and extending this to the entire hole we can (in theory) make similar statements for every location on the hole.

A. The average number of strokes needed from the Tee is 4.91

B. The average number of strokes needed from the centre of the fairway, 180 yards from the hole, is 3.04

C. The average number of strokes needed from the front end of the greenside bunker is 2.62

Let us ignore any practical difficulties in finding these values, and create a course where the average strokes remaining value appears by magic next to your ball after each shot - like this

The players tee up, and note from their magic display that it's a perfect par 5. The player with the black ball plays as follows

The player with the red ball plays as follows

So in total both players have gained 0.5 shots from tee to green.

So we could make a definition that SGtee-to-green is

the sum of strokes gained for the tee shot and all approach shots.

Returning to reality, there may be serious practical difficulties in finding out these average strokes remaining for large parts of the course, much of which is rarely played by the pro's, and the value would wildly vary in the chaotic world of deep rough and bunkers. So I wouldn't expect to see a reliable SG for each individual stroke any time soon, especially considering winds and changing pin positions.

But everyone starts at the tee, and most end up putting from the green, so statistics from putting from 7ft 10in are available. For this reason it makes sense to just take the tee and green values, and calculate the rest as the difference.

1 Note that SGputting is also a comparison with the average player.

8
How does golf technology compensate for the “groove rule” for golf clubs?
5
Does hitting green on stroke 1 also count as fairway hit?