So, in this season, the season 2015/2016, the English Premier League was won by Leicester.

The interesting thing is that in the season before, the season 2014/2015, Leicester ended the season in fourteenth place and if they had only 7 points fewer, would have been relegated to the second (Championship) league.

So, it is kind of a football/soccer miracle that they won the English Premier League.

I would like to know if there are any similar examples of football/soccer clubs that were at some season close to the relegation zone and then won the title in the next season?

Edit: I would like to note here that an examples from other leagues other than English Premier League are welcomed, and as I was requested to objectively define what it means to be "close to relegation zone", let us take for the purpose of the question only teams who were 7 or less points from the relegation zone in one season and then won the title in the next season.

1I remember reading this in the past. Basically scroll down to the 3rd to last graph and the author is claiming that no team has won the EPL from below 3rd the year before. It also looks like Chelsea set a new record for futility in that they fell the furthest of any EPL champ

Here is the graph I was talking about: 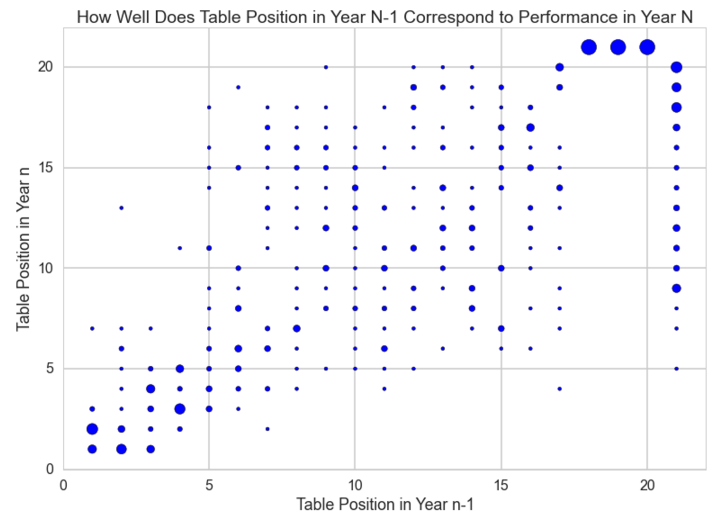 13
Tiebreakers to decide league position in football (soccer)?
9
The history of promotion and relegation in English football
8
When does an English Premier League season start and end?
5
Why Rangers released Marvin Andrews at the end of season 2005 - 2006?
4
When are the English football competitions' schedules published?
5
Is there a penalty for deliberating losing or fielding a weakened side?
4
How many times in EPL did a title deciding final game of the season take place between two title chasing teams?
16
Theoretically, what is the maximum number of times any two English Premier League teams can play each other in a single season?
5
Previous sponsors of Premier League
10
Which is the fifth in the Big Five of European football leagues?