Under which scenarios are using the term “double-elimination game” appropriate? [closed]

Ask Question
Asked 4 years, 1 month ago
Active 2 years ago
Viewed 338 times
0
Closed. This question is opinion-based. It is not currently accepting answers.

We're having a friendly debate, and can't come to a conclusion on whether or not the final game of a series (game 7 world series, game 7 NBA championship...etc) is ever referred to as a "double-elimination game".

A "double-elimination game" can also refer to the fact that either team can be eliminated (2 teams = "double") and is sometimes used to refer to the last game in a series, as mentioned above.

On one hand, Group A asked a sports writer Alyson Footer about it: 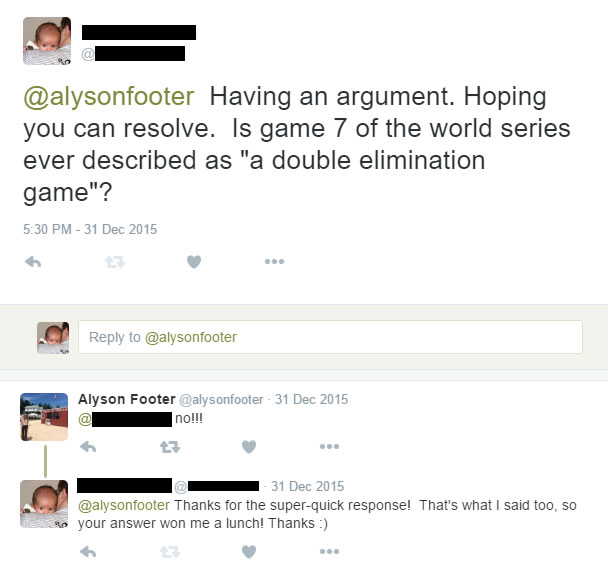 Which certainly points to Group A being correct.

But Group B found this article:

Under which scenarios are using the term "double-elimination game" appropriate, especially as it pertains to the final game of a playoff series? Can anyone clarify or give a definitive answer or explain when it's used different ways, or any clarification?

Looking at the google search results for the term "double-elimination game", you and the cited article seem to be the only ones using the term. As the first people to use a term, it is upon you to define it (you could argue that the article is the first known instance of the term, so it gets to define it).

In a double-elimination tournament, there is a top/winners and a bottom/losers bracket.

Not the answer you're looking for? Browse other questions tagged terminology tournaments or ask your own question.

12
Origin of the term “Heavy Ball”?
9
How are the age restrictions followed by ICC for under 19 cricket tournaments?
10
How does a double elimination bracket work?
5
Where does the term 'Castled' come from?
5
In what sense is the term “pigeon” used in tennis
3
What's the English term for setter positions in volleyball?
7
Why isn't the term “hat trick” used in American Football?
2
How did the term 'English' originate? (spin on a ball)
1
What's the English term for this double-elimination tournament variant?