In Rugby, why can't the tackling team pick up the ball after the ball carrier lets go?

That's basically my question. When a ball carrier is tackled, he usually lets go of the ball (behind him more often than not). Why can't the opposing team pick up the ball? And who is legally allowed to pick up the ball at that moment? Is there a name for this position?

Edit: Why is the blue team not going for the ball in this scenario: 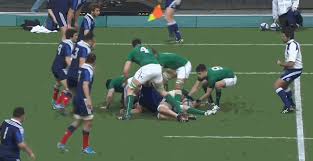 Once the tacklee lays down and set the ball they form their "side". The tackler must be on his side before he can return to grab the ball.

I played wing for large university outside of football season - and have also broken this rule 20+ times so I have an understanding of it.

And in most cases me or the other wing is going to get cleated and kicked as the guys working the scrum have quite the disdain for wingers. I mention the wing position because this kind of play happens most in the open field where wings would get the ball. Normally in more congested part of the field a player is tackled, set the ball behind them and then a teammate picks it up while stepping over them.

Not the answer you're looking for? Browse other questions tagged rugby-union or ask your own question.

7
Can a rugby player who has hit the ball forward be tackled before the ball hits the ground?
5
Why rugby players try run to the center in-goal area?
2
When and why did rugby union change the number of reserves?