Why is field hockey played with water on the field?

In the recently held Champions Trophy, I saw that the players play with water on the field. 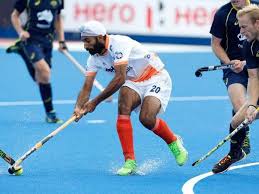 Why is water present on the field?

The game was being played on artificial turf. According to Wikipedia:

There are three main types of artificial hockey surface:

The purpose of water is:

On water-based pitches, shorter fibres and wetted turf reduce friction and increase the speed at which the game can be played.

Elite-level competitions, such as the Olympic Games and World Cup, require a water-based playing surface.

Not the answer you're looking for? Browse other questions tagged field-hockey or ask your own question.