Is this the oldest top ten in history?

So we're all surprised that we haven't had a young teenager shake the game for a while now but only one person under 25 in the top ten! The combined age of the top ten is 289 with an average of 29!

My question is if this is the oldest top ten of the ATP ranking in history, both in terms of the average and combined age.

According to the blog Where is the next generation in men’s tennis? (Wayback Machine) written by John Burn-Murdoch (FT Data) in November 2015:

The average age of the ATP top 10 is 29.7 — the highest it has ever been — with an unprecedented five of its current members aged over 30.

Here is a graph provided in the blog showing average age of Top 10 since 2000: 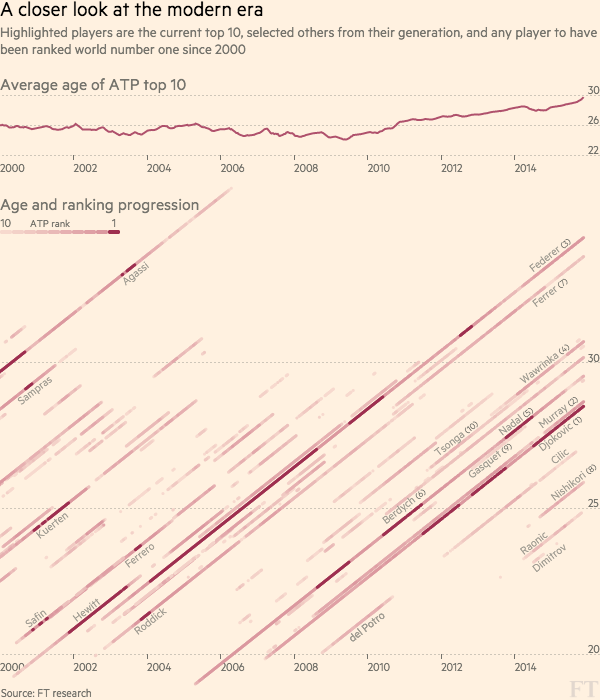 Although they do not provide the data used for that stat, I am inclined to believe the claims from that article. So it really seems that we are close to the historical peek.

My personal guess is that the average age might have dropped recently, after David Ferrer (34) got out of Top 10. And then it dropped again a bit after relatively young Dominic Thiem (22) entered Top 10, following French Open - where he reached his first Grand Slam semifinals.

This article articulates your point and provides some of the data you might be looking for with both the male (ATP) and female (WTA) tours.

As of now (July 2016) there is only one teenager ranked inside the top 50 in the world on the ATP World Tour - Alexander Zverev at a ranking of 28. Dominic Thiem is also currently a notable youngster since he is ranked #8 at the age of 22. Both Zverev and Thiem have jumped to their current career-high rankings recently though, so they are not likely to factor into many "average age" calculations done on the age of top 10 or top 50 players unless those calculations were performed on recent rankings data.

As an avid fan and follower of the sport of Tennis, I can say that the trend of the top players being older in age does not surprise me that much given the relatively recent advances in many areas of the sport in regards to fitness, strategy, strings and global competition. These are all things that get tweaked and refined to perfection over years of trial and error. Not to mention players adjusting to the demands the sport puts on them by the media, long schedule and travelling all over the world.

Given the ridiculously long schedule Tennis players endure, today's top players are training year-round. They've also put in the time to know exactly how much to train without over-training and have developed highly specific training routines that science has shown to benefit the skills in demand for tennis players like optimal breathing patterns (no joke), balance, hand-eye coordination, core strength & stability, etc. Today's top players are also making use of recovery techniques that weren't known of or available to top players in the past such as ice baths, oxygen rich recovery chambers, Kinesio tape and more.

Younger players don't have the benefit of a sort of wisdom that older players have obtained from having already played on the tour for years. The more matches and different opponents you have under your belt, the more you know about an opponent's tendencies (and weaknesses). The more veteran players are also more likely to have a coach helping them scout opponents. Tennis is also a sport where knowing yourself well is a benefit to the mental aspect the sport brings with it. Knowing your own tendencies and bad habits are key in helping you avoid mistakes. In pro tennis the margins between victory and defeat are commonly so thin that the player usually making fewer mistakes determines the winner and loser.

Luxilon and polyester strings have changed the way players can hit the ball - especially on the service return - without worrying as much about the ball going out. These strings didn't hit the market until the late 90's - right when players like Federer and Roddick started their professional careers.

Tennis has players hailing from many more countries now than it used to. Back in the 80's and 90's, tennis players from Serbia hardly existed, let alone atop the rankings. Now you have the top player in the world being Serbian as well as multiple players in the top 100 from smaller European countries like Serbia, Portugal, Czech Republic and Croatia, as well as Asian countries like Japan and China starting to produce top players (e.g Kei Nishikori). Although I don't have any hard evidence backing up my opinion on this - I think this makes it tougher for young pros to reach the top of the rankings as they have more travelling and conditions to acclimate to on their ascent to the top. Big tournaments in cities like Shanghai, Beijing, and Tokyo are also now a thing that didn't exist in pro tennis a couple of decades ago.

Not the answer you're looking for? Browse other questions tagged trivia tennis history ranking atp or ask your own question.

14
What is the oldest documented sport?
10
Why Nadal would take ATP No.1 and overstep Djokovic if he just reaches the final?
16
Are Masters 1000 tournaments mandatory for top ranked players?
6
How are doubles seeds calculated?
1
When was the last time a single country had three players in Top 10 of WTA rankings?
4
Oldest footage of a complete football match
2
What do “2 of 6” and “4 of 6” mean in the context of this tennis schedule?
2
How do top ranked tennis players choose ATP 250 tournaments?
5
Non-USA superstars in the NBA seem to be much taller on average than superstars from the USA: What exactly is the reason?