What is the most efficient way of kayaking across a river with light flow?

When kayaking with a friend diagonally across a wide (1.5km) river channel from point A to point B, I always find myself being swept by the current such that my travelling path becomes curve instead of a straight line although I am always pointing my kayak towards point B. Curiously, my friend and I would get separated by a very wide margin (500m) at the middle of the channel before we merged back together with me lagging just slightly (50m) behind.

Is it really more energy efficient to kayak from point A to point B while maintaining a straight line path? And how does one keep the path straight while travelling against the river current?

Let's have a look at what's going on here:

When you kayak across a river it's not as simple as going straight from A to B. The flow acts on the boat and you get pushed down-stream like this: 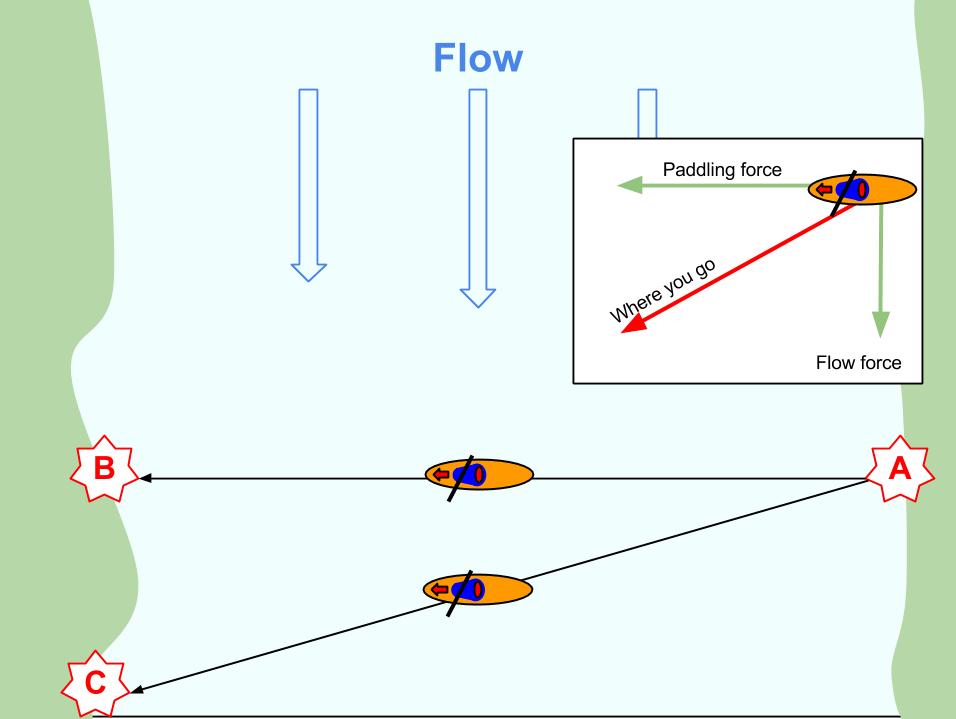 It looks like you've been getting pushed down-stream but turning the boat a bit along the ways so your path looks like this: 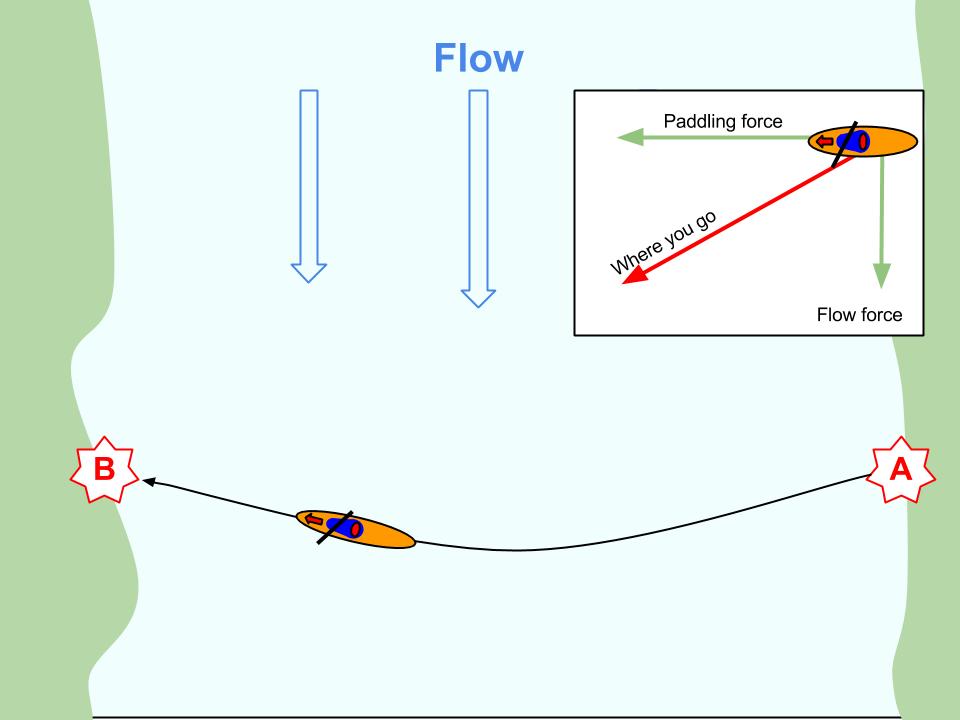 So what's the best way of getting across?

There's a simple technique called Ferry Gliding that allows you to use the flow to push you across the river. 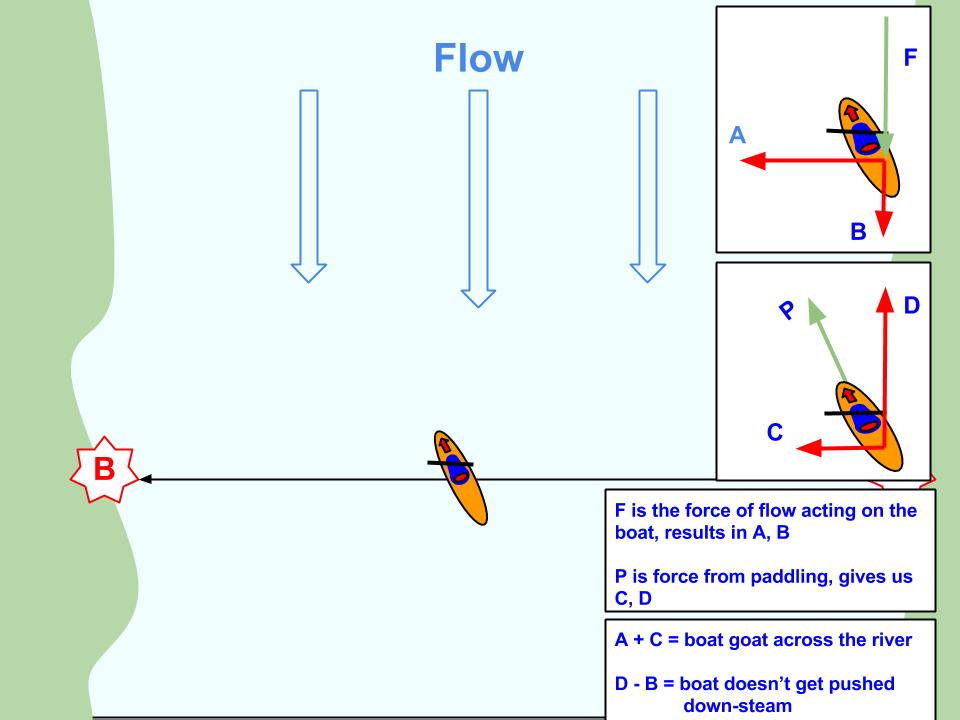 EDIT: note that F is the force of flow as it acts upon a cross-section of the boat. ie. The more in line with the flow, the less the flow acts on the boat. This is why for greater flows we need to point more up-stream, while it means that the ratio of B to A is greater, it reduces F and therefore B, at the expense of speed across the river. With lighter flow the value of F will be relatively small, so we can afford to have more of it push across the the river without getting pushed down-stream.

Does that make it clear? An interesting thing that this shows (which was completely unintentional when making the picture) is that D>B, this is often the case with light flows. As you can see though, if you alter the angle so that the boat points more towards the opposite bank then more of your paddling will go into getting you across and less of it into going up-stream.

That's a simple description which will work for light flow*. For stronger currents edging the boat will be vital to stop you falling over, amongst other things

What won't be easy is trying to bludgeon the boat into maintaining a straight line across. You will expend a lot more energy turning the boat back into the flow than you will actually crossing. Even if this feels like a straight line between A and B (which it will be on average), the actual distance travelled will be much greater and will be something like this: 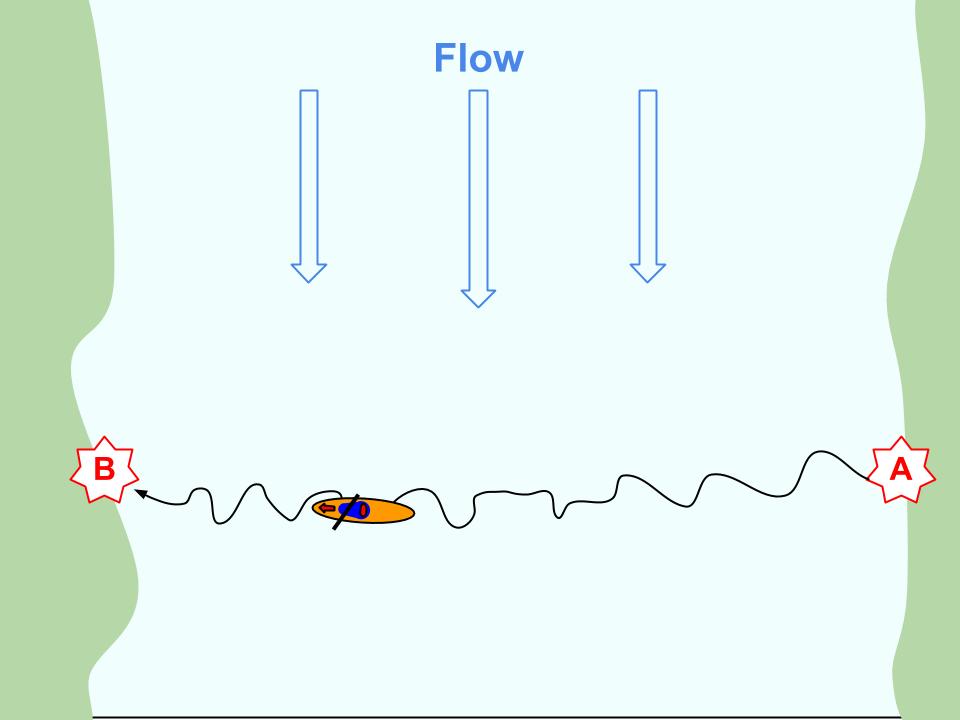 So, one last loose end?

Why were you far apart in the middle and close at the end?

Well in my opinion, but there are just too many variables for me to say, it's because water travels fastest at the middle of the flow*. This should make your boat want to turn to face down-stream for the first half of the journey and up-stream for the second half, resulting in a path something like picture #2 above. Some of the distance will be closed in the second half because you'll have been effectively ferry-gliding a bit for the second half.

*normally this is the middle of the river but it's entirely dependant on the shape of the river, river-bed etc but it certainly sounds like it's true in your case

3
What technique is most efficient for turning a canoe fast?
2
What is the name of this kind of pass, done with the outside of the foot?