Boxing matches that do not finish by knockout are decided by points.

There are three judges that give points (10 or 9 usually, but other values are possible) to decide the winner of each round.

How does those points work? 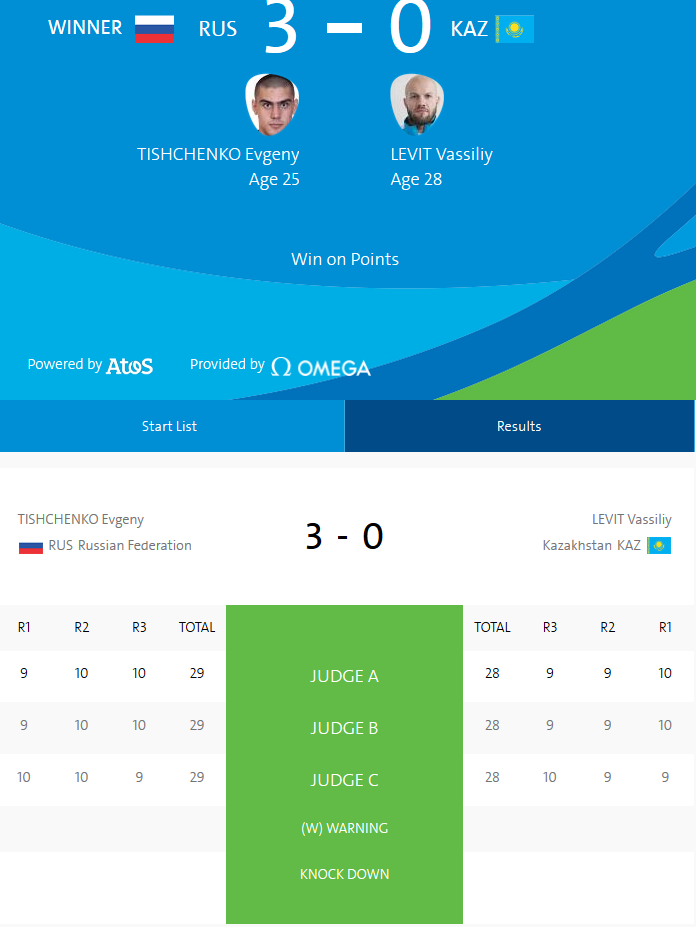 From the official website of the most recent Games (Rio 2016) (emphasis added):

Five judges score both fighters after each round, but scores are not revealed until the end of the bout.

A boxer receives 10 points for winning a round, while the loser gets between six and nine.

Athletes are scored on successfully landed blows, domination, competitiveness, technique, tactics and adherence to the rules.

A computer selects the scores of three of the five judges at the end of the bout – and the final score is an average of these judges’ scores.

AIBA is the body responsible for regulations, so they give us more detail on how the system works. From their website, the relevant rules document (warning: PDF file) states in rule 3,

3.4. At the end of each round, each Judge must determine the winning Boxer of that round by awarding a score of ten (10) points and by awarding nine (9) or less points - down to six (6) - to the losing Boxer, depending on the judgment as to the degree to which the opponent lost the round. Every round must have a declared winner.

Thus, the winner of individual rounds is not of particular importance. It is their total score from a maximum of thirty points compared to the opponent, that matters.

For example, a boxer could lose two rounds by 10-9 each, and win the remaining round by 7-10. The scores are then 27-28, so the boxer wins the match even though they lost more rounds.

Not the answer you're looking for? Browse other questions tagged rules olympics boxing or ask your own question.

2
How are UFC scores awarded?

10
Deciding the winner of a boxing match
4
How are the locations of the Olympics determined?
4
How are percentages determined in volleyball?
3
How teams are ranked if they are equal in points in UCL groups
6
How are tennis tournament draws determined?
3
How is the scoring determined in Winter Olympic Sports?
1
Are there fewer professional heavyweight boxers today than there were in the Golden Age of boxing in the 1970s?
2
Where are all the post-event olympic interviews?
0
Why is Olympic Archery 1-on-1 rather than all-at-once?