Why was USA disqualified from the 4x100 men's relay final in the Rio Olympics?

After the mens 4x100 relay final races in Rio on August the 19th the commentators said they exchanged the baton outside the box.

What does that mean?

4x100m relay are composed by 4 runners that run approximately 100m each. To avoid that a faster athlete run a longer section are imposed limits for the passage of the baton. 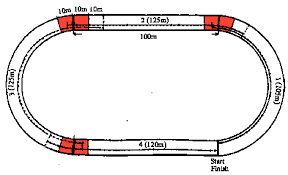 To add to Ale's thorough answer: in the case of any disqualification in a major athletics event, the official results will usually cite a specific rule in the IAAF competition rules (which Ale linked). If you look up that rule you see what violation they're being disqualified for. In this case it wasn't immediately obvious which exchange was the problem from the results, but often the rule cited in the results gives you the clue you need to explain the disqualification.

Not the answer you're looking for? Browse other questions tagged rules terminology olympics running track-and-field or ask your own question.

2
Why did Mumbai Indians get an extra delivery to win with a better run rate?
5
What does it mean to 'turn pro' in a sport?
5
Why was Canada's Mens 4x100 relay team DQed in the London Olympics?
3
What does HF stand for in context of track and field abbreviations (WR, MR, etc)?
9
Rules and punishments for causing crashes in track cycling (omnium, points race)
3
What does it mean to follow the person into the referee's notebook?
1
What are "holding numbers" in cycle races?
3
What is the point of the "Small Final" in Snowboard Cross?
3
Why do top NBA stars from USA skip the Olympics?