Why keep the left arm straight in golf but not in baseball batting?

A common advice in golf is to keep your left arm straight. (The terminology used here is for right hand players.) For some players it is possible to compromise slightly with this advice and still hit balls reasonably. But if you look at top players, the majority will adhere to the standard.

The movement in baseball batting is very similar to the golf swing. A rotation of the body core is transferred to the arms and bat/club.

But in baseball batting, keeping your left arm straight is not considered an important part of the technique, to my knowledge. (I have no deeper knowledge of baseball, though.)

What is the reason for this difference in technique? (A baseball bat is about 3 times as heavy as a golf driver. But that is not an explanation in itself.)

The reason why the left arm should be kept straight in golf is often said to be the increase in swing radius obtained, producing longer shots. If this is the only/major reason remains to be proven, in my opinion.

One thing to consider here is that hitting a baseball is a reaction move and hitting a golf ball is not.

Having 15+ years of golf experience, one reason why top golfers will "adhere to the standard" is for consistency and reliability. As different as golf swings are (eg, Jim Furyk, Bubba Watson, Rory McIlroy), players are similar at different points of the golf swing, especially impact. The "increase in swing radius" is a minor benefit compared to consistently and reliably hitting a golf ball long and straight.

Having played a season of ASA slow-pitch softball, using the same swing as I do in golf isn't feasible. If you go into the batter's box (with your heels as close to the boundary as possible), face the plate, and reach your left arm straight, the handle of the bat (or, at best, the middle of the bat) will be over the strike zone. You want the barrel of the bat to hit the baseball.

If Miguel Cabrera was hitting a golf ball or if Bubba Watson was hitting a baseball, it is evident that body position will be different as a result to adjust to where they need to make contact. 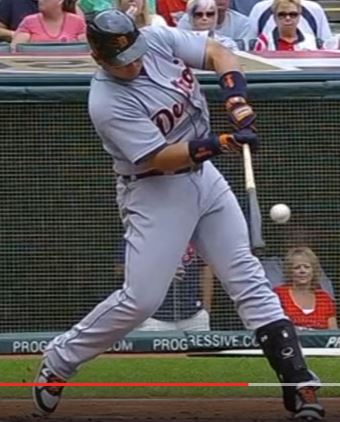 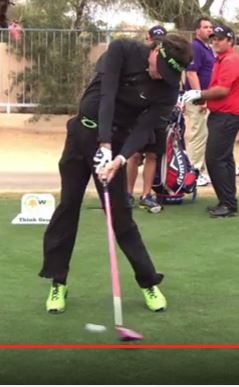 One more good reason to keep your left arm straight on a golf shot: precision.

In baseball, a long-term batting average of .300 is pretty darn good. That's slightly less than one in three at-bats resulting in a batted ball good enough to get the player on base without some error by the defending team. Additionally, out of however many pitches a batter will see in a season (let's say they see an average of five per at-bat, an average of 4 at-bats in a game, times 162 regular-season games, so somewhere in the neighborhood of 3,200 pitches per season), the home-run record is 73 in a regular season, and that guy admitted to steroid use. So in a record-setting performance, a baseball player will hit about 2% of the pitches he sees over the wall, and will hit a home run in just over 1 out of every 10 at-bats.

A golfer who hits the same percentage of "good shots" (up in the air and in the general direction the player intended), even using the higher one-in-ten statistic to make up for the fact that the ball isn't moving, or even the one-in-three statistic just to be exceedingly generous regarding the number of variables inherent in the batters job versus the golfer's, would be asked to leave the course after three holes, for tearing up the fairways and slowing other players. The best baseball players can do is simply nowhere near good enough in terms of ball striking precision to even show up at the golf course. The golfer, on every shot, is expected to hit a ball 1.625" in diameter using a club with a sweet spot about as big as the ball itself, on the end of a shaft that can be up to 6 inches longer than a baseball bat. Not only do they have to do that, but every shot is expected to be accurate to the level of Babe Ruth's famous called shot (within a section of bleachers), otherwise it's seen as a miss.

That is the level of precision professional golfers require just to end up with a par score, much less to find the extra 10-15 shots over 4 rounds of golf needed to win a tournament. Their technique, therefore, requires precision over power. A straight left arm keeps the swing closer to a single plane, and more importantly, brings the clubhead right back to where it was at address, which is the biggest aid to precision that a golfer can give himself.

This is just an opinion from the television viewer.

I think the big difference between the two swing techniques comes from the ball to hit:

Adding to Ale's great answer, you should note the following big difference between golf and baseball:

Not the answer you're looking for? Browse other questions tagged baseball technique golf or ask your own question.

11
Why are there dimples on the surface of golf balls and how do they function?
6
Why are those 3 holes at the Masters golf tournament called "Amen Corner"?
3
Why don't left handed power hitters bunt against the shift?
3
Is there something called an offensive error in baseball? If not, why not?
1
Why not get the force out at third?
10
Why are there no left handed catchers in baseball?
12
Why did baseball players start wearing gloves but cricket players not?
2
Why do golfers always advise people to keep their arms straight, when this is impossible to do?