In FIA rules, how do passing rules apply to this situation?

Please examine the following diagram and forgive my crudeness. Please consider both cars to be traveling at relatively equal speed. 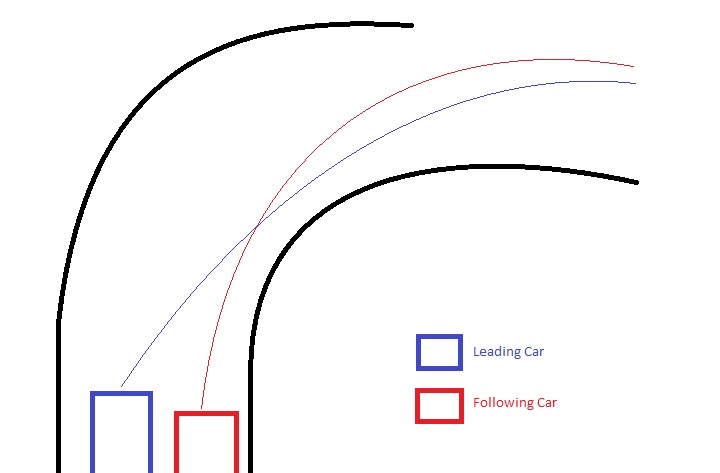 Under FIA rules, what are the correct decisions that the drivers should make?

It would also be very helpful to have a link to or citation of official FIA rule(s) that help clarify this.

16.1 "Incident" means any occurrence or series of occurrences involving one or more drivers, or any action by any driver, which is reported to the stewards by the race director (or noted by the stewards and subsequently investigated) which:

a) Necessitated the suspension of a race under Article 41.

b) Constituted a breach of these Sporting Regulations or the Code.

c) Caused a false start by one or more cars.

e) Forced a driver off the track.

f) Illegitimately prevented a legitimate overtaking manoeuvre by a driver.

So, blue can't ram into red. Blue can't force red off the track.

I also believe red is allowed to follow the track that you have drawn, since that would not be illegitimately preventing a legitimate overtaking manoeuvre.

I believe blue would be in violation of g) if it forced red to slow down in order to avoid a collision.

Manoeuvres liable to hinder other drivers, such as deliberate crowding of a car beyond the edge of the track or any other abnormal change of direction, are not permitted.

This also supports the red car in your diagram.

The only exception would be if the red car was being lapped by the blue car, in which case, the red car must allow the blue car to pass un-impeded at the first opportunity.

The red car would be entitled to be left room, by the blue car, in this situation. Therefore, the blue car has one of two options;

If the red car is ahead at the corner exit, they are also entitled to "take the racing line", which means they can run out to the edge of the track, so if the blue car chose option 1 above, they would then have to back off to avoid a collision. However, this is only if it is deemed that they are not intentionally "forcing another driver off the track".

What happens mostly on the track is 'crowding' on bends instead of drivers taking the fastest line through a bend. Crowding is an offence in the same class as brake testing (overbraking) of following cars. However this is not to be confused with "slinging one up the inside", where a faster car or a car with better brakes, can outbrake a car onto the apex of a bend and then deliberately slow onto the apex in order to move round that bend without having to use all of the track and therefore allowing the overtaken car to use the outside of that bend in order to negotiate that bend without having to incur a penalty for leaving the circuit. If you sling one up the inside and you cause the overtaken car to leave the circuit, then you are in the wrong and should have a penalty. If you cause that car to crash or you crash into it, then must receive a penalty also. In applying this type of penalty you must also consider whether the car being overtaken has crowded you and has therefore caused their own demise in this situation.

16
How does FIA enforce the Formula 1 testing ban?
2
who should keep the cornering line
8
Is this an Offside according to FIFA rules?
8
Does triathlon biking passing-penalty rule apply if the rider ahead accelerates?
4
How does the FIA keep track of the teams' power unit allocations?
1
NFL Overtime Rules - why are they like this?
5
Is this a travel under Euroleague basketball rules?
6
Are there official Formula One rules regarding apex disputes, faults in passing and the like?