Does the pressure of the crowd make a difference on free throw percentages?

Whenever I watch a basketball match I see how the audience tries hard to distract an opponent player who is going to attempt a free throw shot: 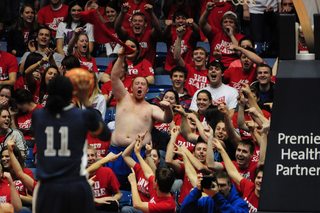 I assume this can be decomposed in multiple statistics, but let's focus on the main one: is the free throw percentage of a player higher when playing in their stadium?

I found some nice statistics, but could not find any splitting in home/away:

Is the free throw percentage of a player higher when playing in their stadium?

That's tough to say. At a glance in the NBA, it seems to be, but not by much. However, there isn't a hard and fast rule that says FT% is higher when a player is playing in their home stadium.

Looking at these statistics, there doesn't seem to be much variance, no matter the FT% (albeit this is a small sample size). The biggest difference in these examples is from LeBron James at .02 in favor of home, but the rest are .01 difference or less either way.

I thought Dwight Howard and Shaq would have a greater difference due to their well-documented ineffectiveness from the free throw line, but that didn't prove to be the case.

Note: This answer considers NBA statistics only. I think collegiate statistics may vary more, but I'm not sure if it would be enough to provide a clear answer to this question.