What do the referees write during the matches?

It is easy to see the referees write on small notebooks during football matches. It happened on some episodes: goals, substitutions, cards.

Especially in the case of yellow/red cards, how can they write about the reasons on such small notebooks? I do not remember ever seeing referees turn the page, so I guess there is only a single side to write on.

As mentioned, referees will record goals, substitutions and cautions and send-offs in their books throughout the match. Referees will also keep track of injuries, number switches between players (e.g. defender switching shirt with goalkeeper), team official misconduct, any further misconduct by sent-off players and any extraordinary circumstances that need reporting to the competition administrator such as:

Every referee will use a different system for recording information - this may also change depending on the competition rules and reporting requirements.

I will now provide some examples of how I record information in matches that I referee.

The first step I undertake is splitting the sheet into my book into two columns. On the left, I write the home team and their predominant colour, and on the right the away team and their predominant colour. Down the bottom of the sheet, I will write the date of the match and the competition name. If other information isn't generally available online after the match, such as the ground and the round number, I will record that as well. When performing the coin toss, I will record each captain's name and number in case I need to communicate with them during the match. I will keep note of who has the first kick off in my book, and which goal they are attacking in the first half (relative to me facing the technical area). At half time, I will rule a horizontal line under all recorded information, record who has the second kick-off, and being recording information again.

This means that number three scored a goal in the 21st minute of the half.

In matches that don't use return substitutes (as mentioned in Law 3.2):

In the forty-fourth minute of the half, a substitution was made in which #5 came off, and #7 came on. I also have the numbers 1 2 3 written at the bottom of the team's column which are crossed out as subs are used to ensure that a team does not exceed the maximum number of substitutions permitted (usually 3).

In all competitions that I've refereed, cautions are not appealable, therefore only the caution offence needs to be recorded. I simply record cautions under the following system in my book:

along with the player's number, and the time that the offence occurred, under the team's column in my book.

Similar to as in Nij's answer, I end up with a row like this:

This means that number 7 was cautioned in the 27th minute of the half, for failure to respect the required distance. Note that in contrast to Nij's example, only the offence is recorded, not the specific details. In the competitions that I referee, it is irrelevant as to whether the offence occurred at a corner kick, free kick or throw-in.

The minute is only recorded in case the player is sent-off for receiving a second cautionable offence in the same match. When preparing the send-off report, for completeness, as well as listing the two cautionable offences, I will also state the minute in which each occurred.

For send-offs (other than second cautionable offence), I will also record on the reverse side of the page some information about the offence to help prepare the send-off report after the match e.g.

When the match is completed, I will also add the player's name from the team sheet to the reverse side of the page.

Send-offs are recorded using the following scheme in my book:

NB As with the caution codes, these may change next season, as the ordering of sending-off offences in the Laws of the Game has also been modified (there is no meaningful order to these).

This means that number 3 was sent-off for serious foul play in the 30th minute of the half. On the reverse side (or in another page), I will have some notes like this. This is not what I would write in the send-off report after the match - just some notes.

Sprinted towards stationary opponent on touchline in front of technical area. Jumped from two metres away with both feet 10 - 15cm off the ground at the ball. Made contact with the ball. Left leg made no contact with opponent, right leg contact with left knee of opponent. Opponent was seriously injured and took no further part in the game.

At the conclusion of the match, this would be updated to:

Sprinted towards stationary opponent on touchline in front of technical area. Jumped from two metres away with both feet 10 - 15cm off the ground at the ball. Made contact with the ball. Left leg made no contact with opponent, right leg contact with left knee of opponent. Opponent was seriously injured and took no further part in the game.

in order to be able to complete the send-off report.

As there is a horizontal rule, this means halftime occurred between the two cautions. So in the 30th minute of the first half, number 4 was cautioned for unsporting behaviour. In the 15th minute of the second half (the 60th minute if we're playing 45-minute halves in the competition), number 4 was cautioned for dissent, and subsequently sent-off for receiving a second caution in the same match.

After the match, I will write the following on the reverse side of the sheet:

in order to be able to complete the send-off report. When completing send-off reports for a second caution, if either or both of the cautions are for unsporting behaviour, as a courtesy, I will also provide the form of unsporting behaviour from Law 12.3 under the Cautions for unsporting behaviour section - e.g. recklessly kicked an opponent, carelessly tripped an opponent to interfere with or stop a promising attack - if I can remember it (I never have forgotten in ten years of refereeing, as it would be extremely unlikely for there to be more than one, or at most two send-offs in a match). However, this is strictly not required in the leagues I referee in.

Finally, I will provide an example of the team sheets and sending-off reports that are used in competitions I referee in. No matter what scheme the referee uses to record information, they must have at least enough information to complete the sheet. Note that in the following team sheets, the referee completes the section that is highlighted in blue (the team managers complete the sections that are highlighted in yellow).

Any injuries, or other pertinent information are recorded in the Referees (sic) Remarks section on the reverse side of the sheet. 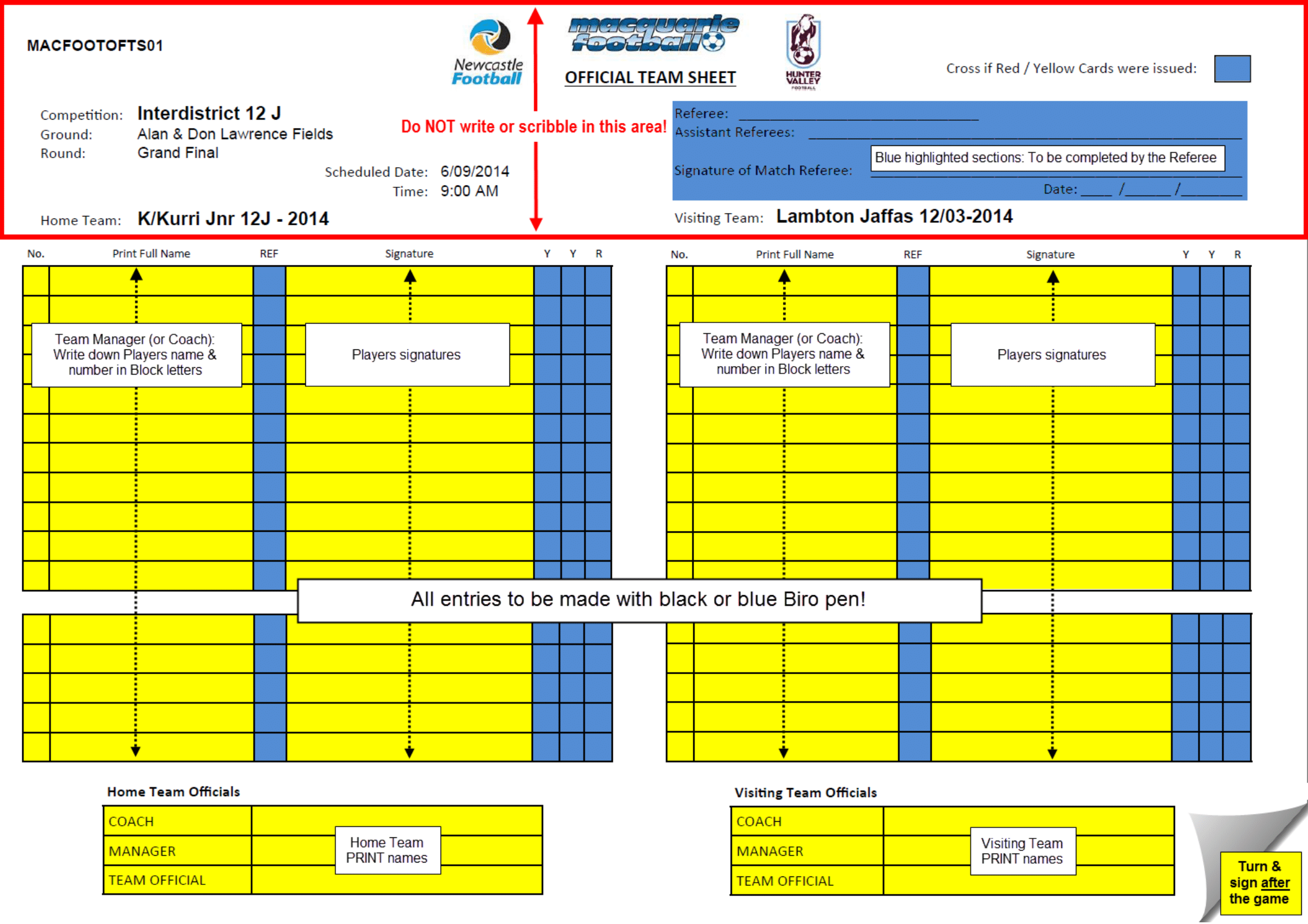 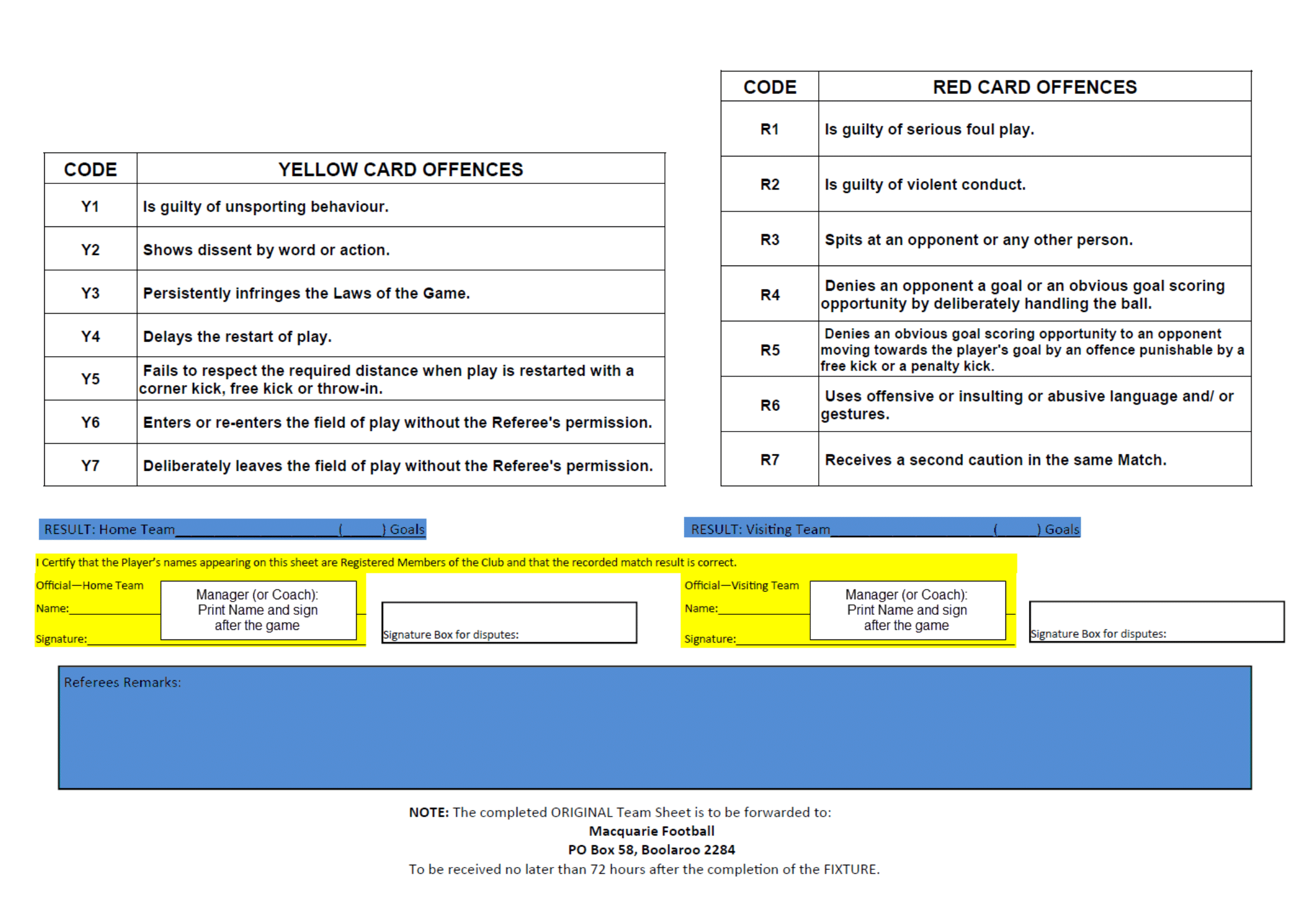 For each send-off that occurs within the match, a separate send-off report must be completed. Information such as the location and round can usually be obtained via the competition website, but it is important to ensure that the player's name is copied from the team sheet, as the team sheet remains with the home team at the conclusion of the match. 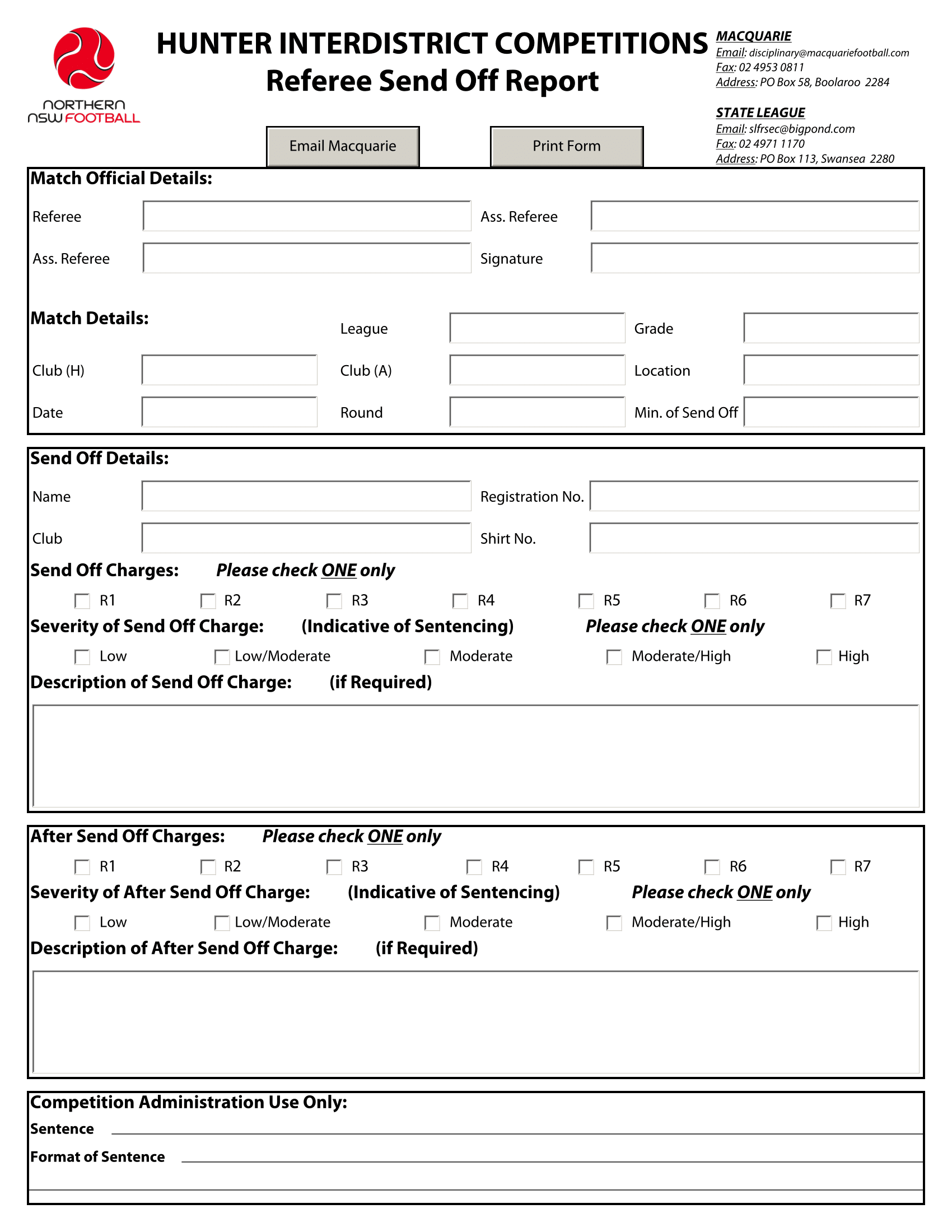 A caution can only be given for one of six reasons, and a suspension for one of seven reasons. That reduces the amount required to remember; an offence is in one of just thirteen categories.

Systems exist to shorten the writing needed. For example, in one possible system

The referee would write "#7 38 C4 @ IFK" to indicate who received the caution, why the caution was given and when, under what justification in the laws.

Various systems are used by different organisations to make it easy to note the reason for a card, and remind the referee what occurred when they write a match report afterward.

Beyond that, referees develop an experience that helps them remember offences long enough to get through the match. They also have two assistants recording everything as well, so if anything is not recalled, the three can confirm details of the event.

10
What do referees do during halftime?
22
What is the stuff referees spray on the ground in Football matches?
5
Is there a penalty for deliberating losing or fielding a weakened side?
3
Interchangeability of referees and assistant referees
3
Differences between referees and assistant referees
10
What do football (soccer) referees do during halftime?
3
Why does the game stop after the kicking team catches a punt?
4
What's the most number of players substituted at once in a soccer game?