Is it more common to score on a kickoff return or a punt return?

I charted the KRs and PRs returned for a touchdown since 1994 (the complete play by play era of PFR). This data is lightly edited to remove inaccuracies due to issues in the PFR system.1 This includes all games, both regular season and playoff, so slightly higher numbers than Ed's which are only regular season as far as I can tell.

As you can see, prior to 2010 the KR and PR seemed to be similar in number; sometimes kicks (blue) and sometimes punts (red) are higher in total for that season. However, after 2010 only one season (2012) had a number of kicks returned for touchdowns greater than 10. 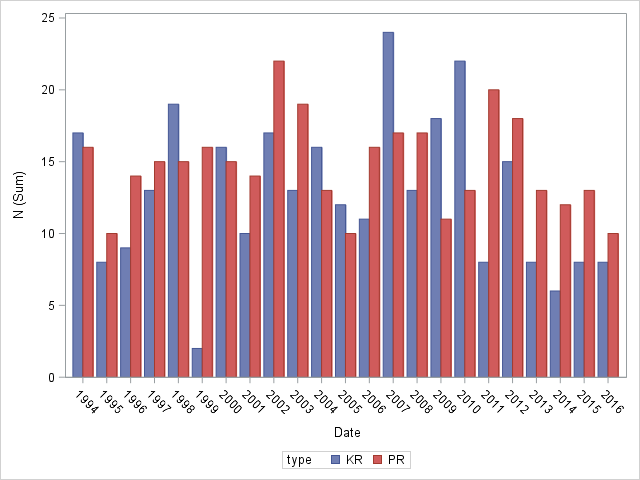 Here is a second chart; the same data as above, but smoothed using an Exponential Weighted Moving Average. This weights nearer years higher; I used an 0.3 decay exponent, which I found recommended by one of the developers of my software.

This is a bit more interesting. Here you see for most years a similar level; there is a bit of a dropoff around 1999 that is either due to the flakiness of 1999 data or an actual year with few kick returns for touchdowns. Beyond that, you see very similar numbers until 2010's drops start being accounted for in the moving average and the blue bars drop off dramatically. 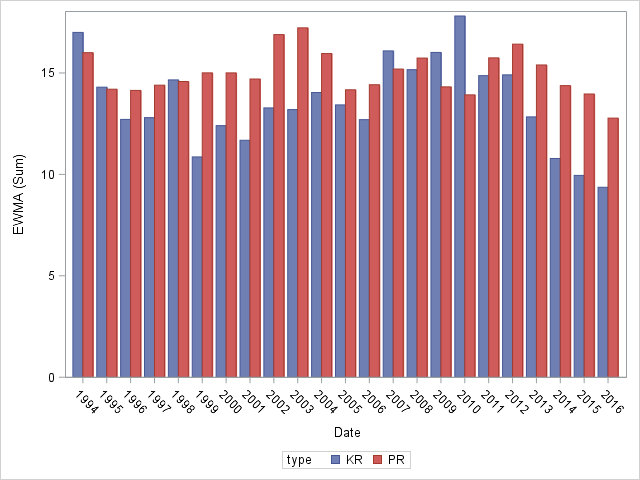 This data is still fairly flaky; I in particular am concerned about the 1999 blip, which while I can't see any evidence of it being wrong is ... strange. Only two valid KR-TDs seems to me to be very odd compared to the other seasons (no other season in that era under 8, and none even post-2010 under 6). (There should probably be a third included, though I can't see a legitimate data-driven way to include it without reviewing every single return; the Music City Miracle is not included as PFR lists it as a 1 yard kick return.)

Either way, I would caution against using only recent data if you're trying to evaluate the Super Bowl history of kick returns; since post-2010 the number of touchbacks rose so dramatically, the return numbers dropped in concert for kickoffs, while punts have had no significant rule changes in recent years.

Punts are also very vulnerable to individuals bumping the numbers significantly with 2+ returns in a season: note the spike in 2002-03, the longer crest in 2006-2008 and return in 2011, for example. This may have some impact on the Super Bowl, as punt returners can be kicked away from, but kick returners cannot.

I remove any KR that is under 60 yards in total distance, or any return that includes "fumble" in the text (though none do with >60 KRYds).

I remove any PR that is from a punt under 20 yards or any punt return that is under 30 yards but has a number in the PRYds field (as the entire 1998 season has no numbers for some reason), or any punt whose play by play includes 'fumble' or 'muff' and yields less than 30 PRYds (I checked by hand, none of the 1998 punts were caught by this).

Not the answer you're looking for? Browse other questions tagged american-football scoring special-teams or ask your own question.

5
Why not go for a field goal attempt instead of a punt in some situations?
12
Declining a delay-of-game penalty: what about an infinite loop?
5
College football game - start time vs kickoff time
7
Why is a PAT required after a game-winning TD at the end of regulation, but not OT?
3
Division Tie Breaker - Common Games
6
NFL blocked punt rules
3
Why does the game stop after the kicking team catches a punt?
6
What is the "main" position of players that are on field at NFL kickoff?
0
NFL players with multiple punt return touchdowns in a game
0
How does a fumble at kickoff or a punt - recovered by kicking team - affect win conditions in overtime?