Why are pitcher's mounds higher than the rest of the baseball field?

Why are pitcher's mounds higher than the rest of the baseball field? What noticeable differences do pitchers (and hitters, if applicable) experience between a flat surface and a mound? 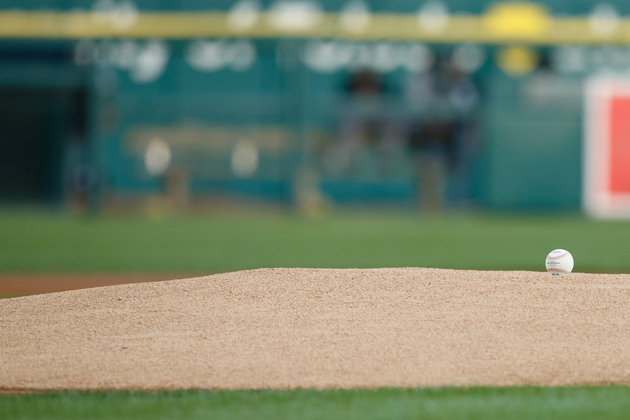 Pitcher mound is a result of trial and error in order to find the perfect distance and height that will be some kind of point of equality so the pitcher and the batter won't be advantage on each other and ensuring the attraction of the game.
It is because we don't want a game when a pitcher is always striking out players and on the other hand we don't want the batter to do a home run in every bat.

First a little bit of history..

How the pitcher's mound was born?

In the early days of baseball , pitchers were required to stay within a pitcher's box that had its front edge 45 feet away from home plate. But pitchers were dominating batters, so in 1881, the front edge of the box was moved back five feet.

But this was still not enough, so in 1887, a new rule required a pitcher to keep his back foot on a line that was 55 and one-half feet from the plate. Finally in 1893, the pitcher's box was removed, but the pitcher's plate, or rubber, was introduced and moved back an additional five feet. That gave us today's 60 feet 6 inches.

With an official diameter of 18 feet, and rising to 10 inches above the level field, the pitcher's mound, or hill, has been a part of baseball since around the turn of the 20th century.

The elevation on pitcher's mound was made in order to return some advantages to pitchers that was lost due to extending the pitcher position.

By elevating their delivery point, pitchers can gain momentum as they stride down towards the plate. This forward motion adds speed and a downward angle to the ball, making it more difficult to hit.

off course there are another speculations like this one:

That the mounds evolved as a matter of grounds-keeping practice, for better drainage and water absorption. After overhand pitching was legislated in 1884, pitchers undoubtedly found the mounds to be an advantage: the downward weight-shift and momentum enable them to generate greater velocity on their pitches.

as you stated in the question

But this was not always true:

During different periods in baseball history, the mound has been much taller. The mound in Philadelphia's Shibe park was rumored to be 20" high at one time, and the mound throughout baseball in the late 60s was as high as 16". It wasn't until 1969 that it was lowered to today's standard.

According to baseball historian Bill Deane:

the idea for a mound was claimed by an 1880s pitcher, John Montgomery Ward. From 1903 to 1968, baseball rules limited the height of the mound to 15 inches, although several groundskeepers were rumored to have added an inch or two depending on the state of their team's pitching.

Over the years, as pitchers grew bigger and stronger, hitting declined. Major League Baseball knew that most fans would rather see home runs than shutouts, so the mound was lowered to ten inches in 1969. The adjustment worked – team batting averages jumped up about 15 points.

16
Why are forfeits in baseball scored as 9-0?
10
Use of the designated hitter (DH) in the MLB
4
Could the home field advantage in baseball be due to the "principle of last action?"
6
Why are baseball parks allowed to be be so different?
6
Why are there so many pitcher types in baseball?
15
Why are NFL hash marks closer than NCAA hash marks?
4
What are the rules in baseball about how close a fielder can stand to the home plate?
10
Why are there no left handed catchers in baseball?
1
Can the home team win an extra-inning baseball game by more than 1 run?
4
Why doesn't the United States have a Professional Women's Baseball League?