Are there any restrictions for the height and width of the blade and handle of a cricket bat?

Are there any restrictions for the height and width of the blade and handle of a cricket bat? I noticed that some players are using bats with short blades(Mongoose).

When it comes to the handle, it should not exceed 52% of the overall length of the bat.

The term cricket bat was first mentioned in 1624. In that time, the bats used to be in the shape of hockey stick because bowlers used to ball underarm ball as there was no bowling rules mentioned.

During 1970's, there was change in cricket rule and bowlers could bowl the length ball as well. Hence, the cricket bat was modified and sides were made parallel with and handle was made thin. This cricket bat is similar to the modern bats used nowadays but, the bat was very heavy and had little stroke in comparison.

It was 1835, the first round arm bowling was allowed and it was necessary to modify the weight of bat and make it lighter so that batsman could pick it and use it with ease. During the same period, bats were first manufactured using more than one piece before this time, cricket bat used to be made of a single wood used to break very fast. 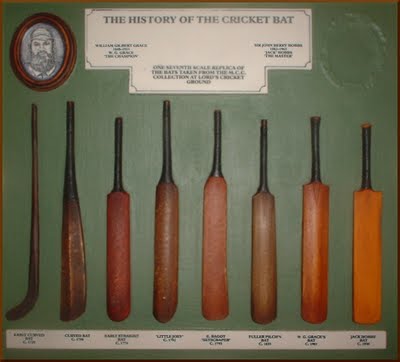 When the size was been fixed and How much ?

In 1864, the over war bowling was allowed and there was more lightening of bat and refining of the blade. There is no any significant history about the cricket bat until 2010.

There are some limits about size and shape of bats as marked by the ICC cricket.

There is no precise weight how heavy a bat should be. Generally, the international level cricket bats are within the range of 1.1kg to 1.4kg. International players like Brian Lara and Sachin Tendulkar used to play with heavy bat in their early days but, the trend of playing with heavy bat has changed drastically.

Not the answer you're looking for? Browse other questions tagged rules equipment cricket or ask your own question.

13
Cricket bat with bent handle?
10
Are there any notable cricketing baseballers or baseball-playing cricketers?
7
Mongoose bat, why don't we play test cricket with it?
13
Are there any size limits on the squad size for international cricket match series?
2
Are there any rules or guidelines concerning players' boots?
4
How much bigger than the blade is the rubber allowed to be?
1
No penalty for hitting catcher in the head with a bat?
0
What Is the maximum - Minimum Size of bat player Can use In cricket?