Was Cristiano Ronaldo's 100th Champions League goal offside or not?

On April 19, 2017, during the second period of the extra time of the second leg of the Champions League quarter-final match between Real Madrid and Bayern Munchen, Cristiano Ronaldo scored his hundredth UEFA Champions League goal (which was also his third goal of the night).

Was Ronaldo offside at the moment the final pass to him was made? Here is a picture of him receiving the ball from Marcelo before scoring: 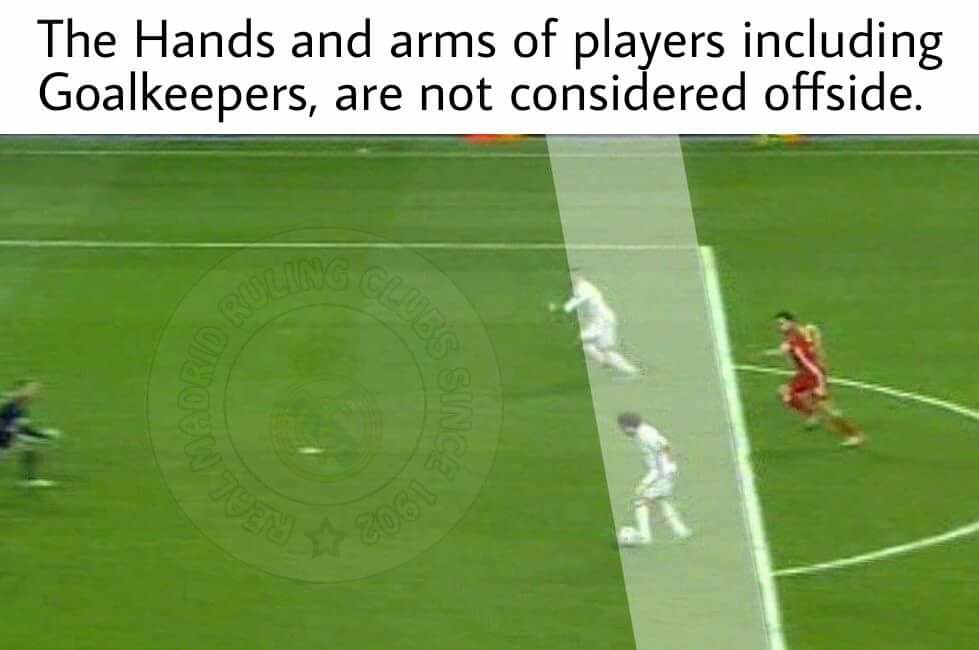 Laws of The Game; Law 11 - Offside; 1. Offside Position state that:

any part of the head, body or feet is nearer to the opponents’ goal line than both the ball and the second-last opponent.

It's obvious that Ronaldo was nearer to the goal line than the the second-last opponent (the guy in the red shirt: Mats Hummels).

Now the dubious part is whether Ronaldo was nearer to the goal line than the ball. The answer is yes, he was, hence, he was in the offside position.

Why? Because the offside-line in the picture you use is not quite parallel to the goal line, but look at another picture from goal.com, Ronaldo's head was closer to the goal line than the ball: 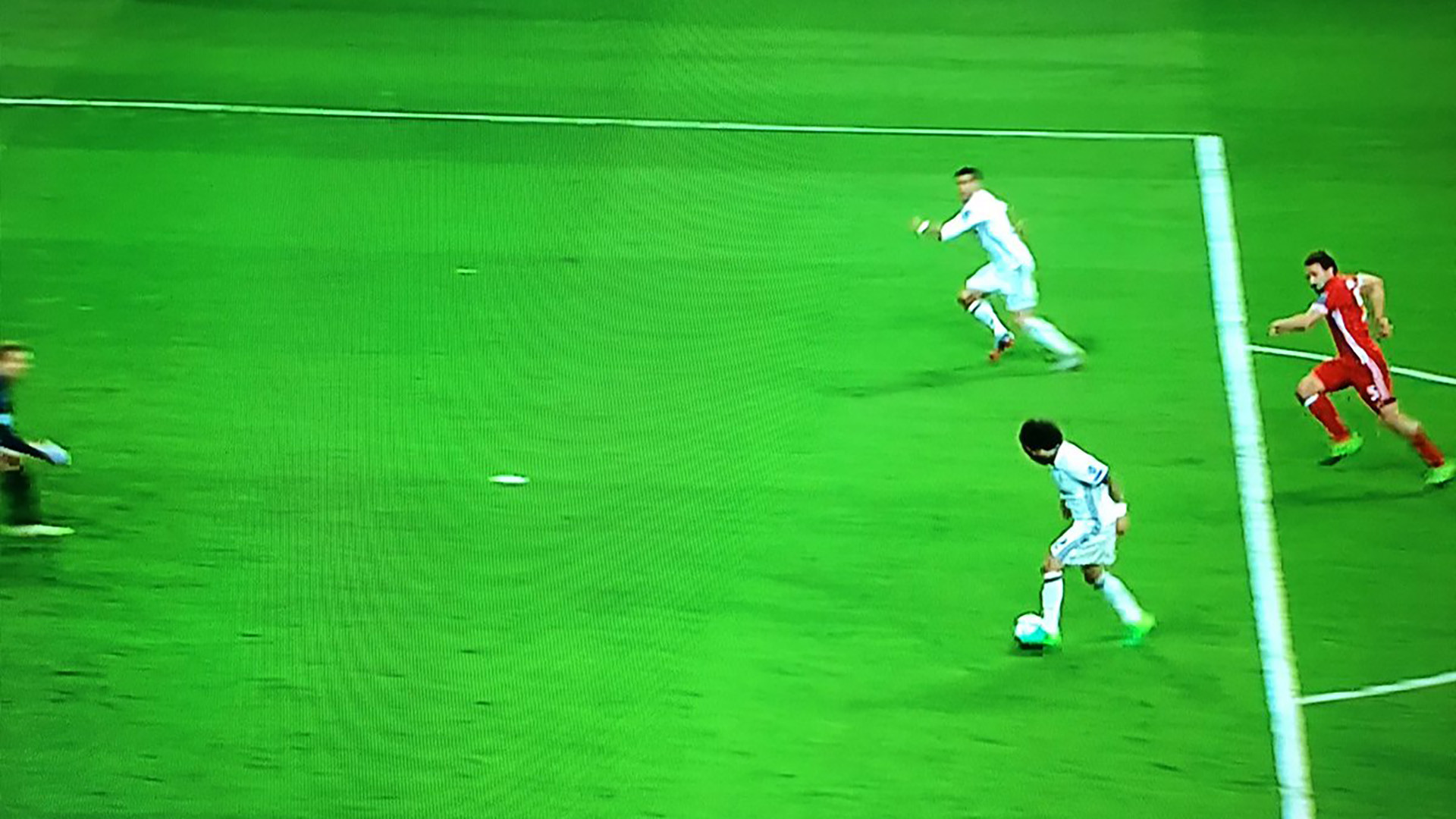 Looks like gdrt gave the rule well (and answered something I've wondered about for a long time too!)

But some of the complexities to the details make it appear close enough that I'm not sure all impartial arbitrators would agree that is a clear-cut offside call, in particular using this picture.

It may not be noticeable to the eye, but the lines drawn aren't parallel. I verified this in GIMP by copying the line for the penalty box and translating it left: 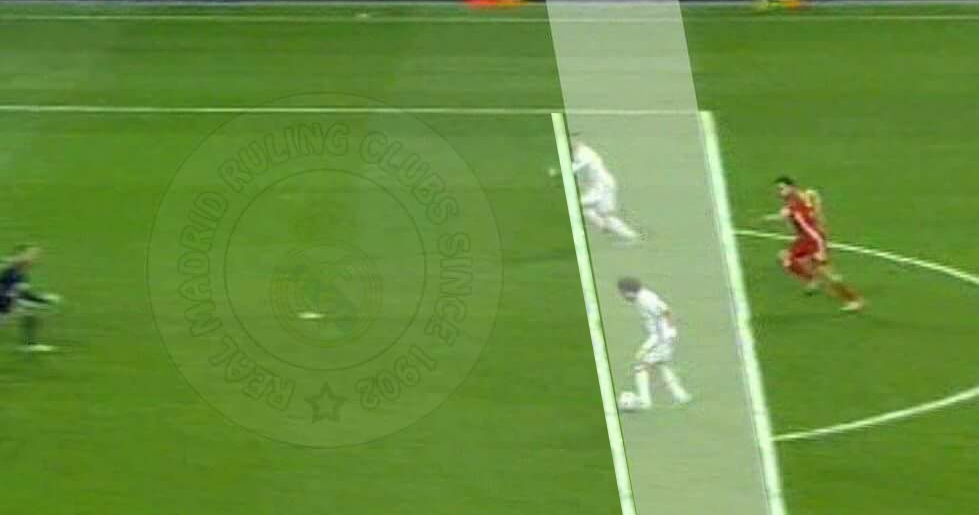 If you look closely, you'll note the increasing green between the previously drawn line and the shifted penalty box line I overlaid as you go up the image. Of course the resolution of that image isn't great, making it all that much more challenging to perfectly diagnose the line.

Then again, the big problem is that lines SHOULDN'T be exactly parallel, as there is always some perspective (angle change of truly parallel lines). See how much the lines change angle in this image:

Perspective depends upon the distance, height, and lens shape on the camera. That picture of the American football field seems setup to exaggerate it. But the result is that, unless the camera is situated on the line of interest (or a continuation of that line), or is directly above/below that line, any camera view can be surprisingly dubious (I've seen so many times where two views from similar locations appear to show different things due to very slight changes in perspective). The fact that the top and side of the penalty box do not make near a 90 degree angle makes me more suspect there is quite a bit of perspective in this picture, though the camera location would need to be known to have more clarity on this. Also note, the perspective can actually converge in either direction due to the shape of the camera lens (and angle of the camera?), so the American football field image doesn't necessarily help determine the proper perspective changes either.

Now, there is the possibility that perhaps the line shown in the image was actually provided by the broadcasters themselves, and that they calculate it based upon the actual geometry of the camera similar to the NFL's 1st and 10 line. That would make it a lot more reliable. I've still seen such systems be imperfect, but it would allow a little more assurance that it is fairly correct, if we knew that they did that. With the trend towards replay officials in soccer, it would seem very important to be able to overlay a properly calculated line reliably onto cameras, taking into account all camera details. Here's to hoping they do that and make clear they are doing that.

That challenge of camera perspective, plus the added difficulty in determining the exact moment the ball left his foot, leads me to suggest it may be too close to say for sure.

In American football we face so many situations in our replay system where things are unclear or debatable that we require so-called "indisputable visual evidence" to make a call. Now what exactly that is... becomes a question in itself! But from my impartial perspective regarding the game (which I didn't see) (and for what it's worth, with that slight background in geometry and a bit of collegiate intramural refereeing experience) I would only suggest that Bayern fans would perhaps be best off not feeling particularly hard done by such a call, as it is quite close... and there continue to be many worse calls made and allowed to stand.

6
How much evidence has to be there to overturn an American football play?

8
How exactly did Carvajal not get booked/sent off after causing a penalty?
5
Is betting on oneself to win or lose legal?
3
Is an own goal scored with hand a valid goal?
7
Can a player receive a direct red card after receiving the second yellow card?
9
What happens when fouled behind the goal line near the penalty area?
8
If Liverpool FC win the Champions League does that mean Coutinho wins it as well or if FC Barcelona win Champions league will Coutinho win it as well?
5
Which is the most frequently played match in football European Cups?
2
How does the VAR decide which camera to use?
2
What is Lionel Messi's, Cristiano Ronaldo's and Diego Maradona's goals per game ratio against european cup/champions league winners?