I'm interested in knowing, which Formula 1 season had the most number of DNF's (Did Not Finish)?

There are various reasons for a driver being classified as a DNF at a GP, including the following:

I have therefore gathered data from the 1992 season to the 2016 season from various sources to answer your question and also to show everyone some interesting stats about the evolution of F1 since the 1990s.

You really realise with the trendline y = -6.96x + 219 on the chart just by how much the number of accidents and mechanical failures decreased over the years, especially in 1996 and in 2003. I guess this shows how the cars evolved over the years and became much more reliable.

Now for the more interesting bit, here is a comparison chart showing the:

I find it quite interesting to see the percentage of drivers who actually finished the races in the 1990s compare to the 2010s.

Finally, here is the table where I gathered all the data for you to see the details: 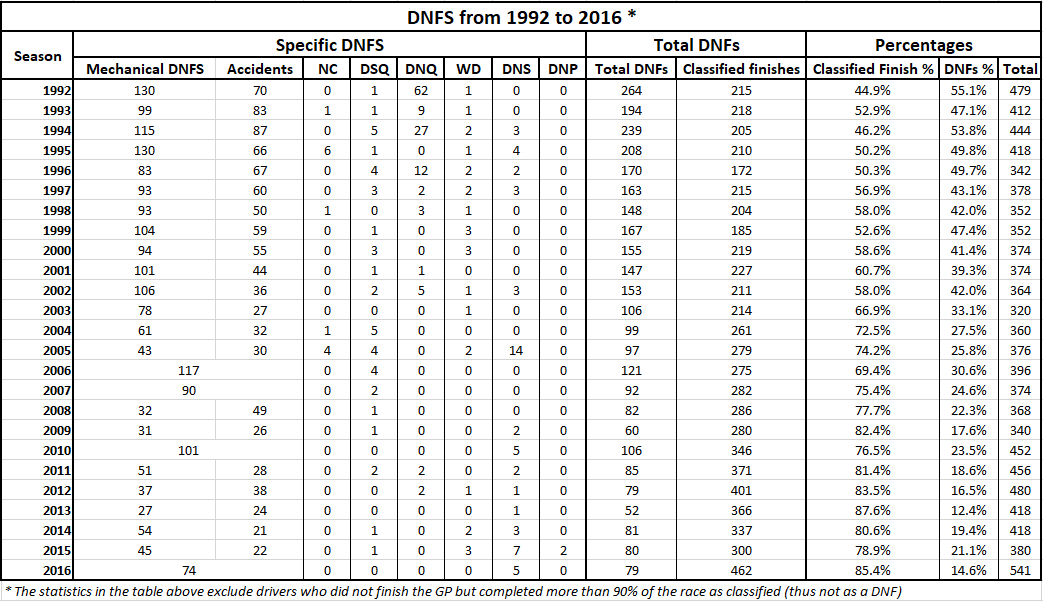 If anyone finds any mistakes in my data, please let me know so that I can make the changes. If you want access to the Excel spreadsheets I used to gather my data, send me a message so I can email it to you.

14
What is the highest number of picks a team has had in the draft?
16
How does FIA enforce the Formula 1 testing ban?
17
Why there is no number 13 in Formula 1?
6
What constitutes the "engine" in the Formula 1 per-season engine replacement limit?
2
What teams have won the Europa League the season after winning the Champions League?
2
Average age of top five European football leagues?
5
What is the record for winning a Formula 1 race by leading least number of laps?
2
Highest Formula One WDC ranking without a podium finish?
8
Which Formula One races did Scuderia Ferrari not take part in?
1
Highest rank in last season without retiring?