Origin of Counter-attacking style of play in football?

Counter-attacking is one of the most used playing strategies in football. After searching for history of this style of play I came across Wikipedia and Independent articles which mention the first use of counter-attack in football may have come from England's Keith Newton in 1970 World Cup quarter-final match against Germany, where he has set up goals for Alan Mullery and Martin Peters. So, my question is:

Is the aforementioned match the first one to use the counter-attacking style of play? And if not, which one was it and when did it take place?

Herbert Chapman is believed to be the inventor of counter-attacking style of play. From his Wikipedia article, citing Studd, Stephen (1998) - Herbert Chapman, Football Emperor: A Study in the Origins of Modern Soccer:

Gradually, he created a style of highly-organised, counter-attacking football, which was at odds with the prevailing orthodoxy but nevertheless highly effective; Swindon Town's England international Harold Fleming, after losing 4–1 at home to Northampton, remarked to Chapman: "You have something more than a team: you have a machine."

Probably, Swindon Town's 1 - 4 defeat to Northampton Town during the period of 1907-1912, when Chapman was the manager of Northampton, was one of the earliest recorded matches that employed counter-attack.

This TheGuardian post also mentions Chapman being the one who practiced counterattacking style of play in the clubs he managed:

Early football very much focused on having the ball and trying to make use of it but, within 50 years, counterattacking had emerged, as practiced by Herbert Chapman, first at Northampton and then, more meaningfully, at Huddersfield and Arsenal.

Note that the counterattacking style of play was enhanced thanks to WM formation that was also created by Chapman:

The WM system, known for the shapes described by the positions of the players, was created in the mid-1920s by Herbert Chapman of Arsenal to counter a change in the offside law in 1925. The change had reduced the number of opposition players that attackers needed between themselves and the goal-line from three to two. This led to the introduction of a centre-back to stop the opposing centre-forward, and tried to balance defensive and offensive playing. The formation became so successful that by the late-1930s most English clubs had adopted the WM. [...] The gap in the centre of the formation between the two wing halves and the two inside forwards allowed Arsenal to counter-attack effectively. [...]

Here is the scheme of WM formation: 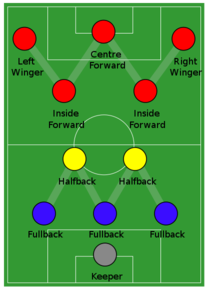 Not the answer you're looking for? Browse other questions tagged football history strategy or ask your own question.

10
Tactics to counter pushing
6
Playoff/Final-4 style end-phase in football
28
Are all oval-track races done counter-clockwise? If so, why?
12
Origin of the term “Heavy Ball”?
13
Origin of this generic hockey photo
2
Offside when the ball was last played by the defending team
4
How to manage the temporary elimination of players in the design of plays for (real-life) quidditch?
5
Origin of the 3rd Down “noise”
2
Why were MLS-style tiebreakers discontinued?
4
In football, how should the referee deal with possible offside situations involving attacking/defending players off the field of play?