Which Olympic sport was the first to have a women's counterpart?

The original Olympics, in Greece, were male-only insofar as the participants, per my research. Modern Olympics, obviously, have men's and women's competitions. However, given that most Western nations (whose cultural norms drive the Olympics) didn't view women as competent until well into the 20th century, I'm curious: which Olympic sport was the first to have a female counterpart?

Alternatively, which was the first co-ed Olympics and which sports featured a women's division?

Women first appeared in the modern Olympics in Croquet at the 1900 Olympics.

22 women competed in this the second modern Olympics in the sports of Croquet, equestrian, Golf, Sailing and Tennis,

HĂ©lĂ¨ne de PourtalĂ¨s (Sailing), Charlotte Cooper (Tennis, one in singles and one in mixed doubles) and Margaret Ives Abbot (golf) won the first gold medals as female participants in these Olympics. As Ed mentions golf and tennis were the only competitions where women competed separately.

While lacking in a great deal of detail Wikipedia has a graph of the percentage of total participants that were female by year for the Summer Olympics: 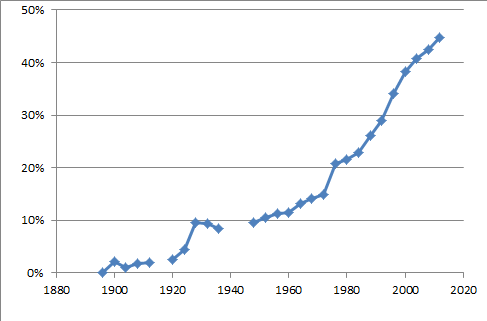 In 1900, the second modern Olympic games, 22 women competed in 5 events: tennis, sailing, croquet, equestrian, and golf. Furthermore, only golf and tennis had exclusive events for women only. (1)

Not the answer you're looking for? Browse other questions tagged history olympics gender or ask your own question.

26
How does a sport become an Olympic Sport?
17
Has the Olympic host nation ever been changed after it was announced
7
Where and when was the first women's soccer team introduced in the USA?
7
What is the oldest and active olympic sport?
1
Has rugby been an Olympic sport prior to the 2016 Olympics?
6
What was the first team sport ever invented?
4
Athletes who have won Olympic medals under the olympic flag
4
How many olympic gold medal ties have there been?