What happens when fouled behind the goal line near the penalty area?

Now that you've remembered, my question is what if Benzema would have been fouled behind the goal line (outside the pitch) near the penalty area when the ball is still clearly in the field? How the game would have been then restarted, namely, if Benzema was fouled at this very moment: 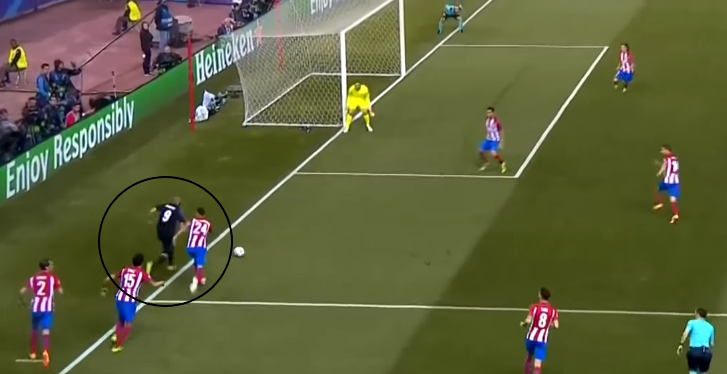 The possible outcomes that I think of are:

If, when the ball is in play [...] a player commits an offence against a match official or an opposing player [...] outside the field of play, play is restarted with a free kick on the boundary line nearest to where the offence/interference occurred; a penalty kick is awarded if this is a direct free kick offence within the offender’s penalty area.

Therefore it would be a penalty in the specific case you highlighted.

As the last sentence in his reference to the Laws of the Game by @Philip in his answer still wasn't crystal clear:

a penalty kick is awarded if this is a direct free kick offence within the offender’s penalty area.

I have emailed IFAB to ask for their interpretation and I got an answer from Dr. David Roland Elleray MBE himself, Technical Director of The IFAB. With his kind permission I am now publishing it here:

As contained in the revision of the Laws for 2016/17 (and extended in scope for 2017/18) it states in Law 12 that if a player commits an offence against an opponent off the field of play (with the ball in play) the referee awards a free kick on the boundary line closest to where the offence occurred. The free kick is direct or indirect depending on the offence.

If the offence is one punishable by a direct free kick and the point on the boundary line is within the offender’s penalty area then a penalty kick is awarded. [emphasized by me]

I hope this clarifies matters for you.

10
Requirements for Touchdown Catch Near the Goal Line
13
Is it a goal if, during kicks from the penalty mark, the ball goes outside the penalty area and then into the goal?
8
What happens after eleven kicks from the penalty mark?
4
What if goal happens whilst a penalty VAR review is in process?
3
In football, what happens when a team commits an offence for which play need not be stopped, and then scores a goal immediately after?
4
Should Jorgensen have been sent off for his DOGSO foul in Croatia-Denmark (2018 FIFA World Cup)?
1
What counts as "onside" when a ball is kicked from the in-goal area?
3
What happens after the penalty if a player is snookered behind a free ball?