How is the "best loser" determined in football?

We have played a 7-team competition, all seven teams met, we eliminated the team with the lowest points. After that the remaining six teams played knock out games and the three winning teams will go direct to semi-finals.

We decided that 4 teams should be picked to go for semi-final and that the best loser will join the other three to make it four teams to battle at the semi-final and final.

Now should you want a best loser to join the other three teams making four teams to play in the semi-final, who among these three teams would be in the best losers position.

It would have been better if there was predetermined criteria to select best loser. As there is no indication of that criteria, selecting best loser can be done in following ways:

Ideally, the rules of the tournament should be defined before it starts, but now that we're here:

In my opinion, the best loser out of 3 teams lost in the quarter-finals (or 1/6 finals in your case) is the one who performed better in the games involving only those 3 teams during round-robin phase or even who finished higher in the table.

Because this way the loser will be most probably the strongest one. Why? Here's a demonstrative example:

In my opinion you have to set quarterfinals with the best 6 teams as following: 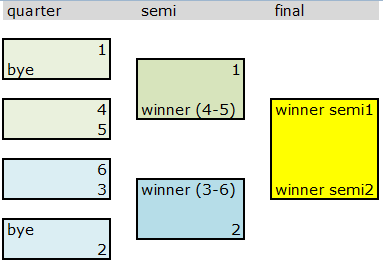 I would say the third team, since they lost on a penalty shootout, thus implying that they were able to hold on to a draw throughout regulation and extra time. As for the other two teams, I infer from your post that they lost in regulation outright.

You're creating a problem that doesn't need to be solved, when better methods exist.

A quarterfinal round can be complete with only six teams. This naturally requires two byes, and it makes sense to have those be the two highest-ranked teams from pool play.

Given that the games have already been played, the fourth place should go to the team with the best performance in the "quarterfinal" which is the team who achieved a draw, not either of the teams who were beaten.

Not the answer you're looking for? Browse other questions tagged rules football ranking tournaments schedule or ask your own question.

0
Who is the best loser at a knock out tournament between a 2:2 and a 0:0
0
Tiebreakers for best loser in a single elimination playoff

55
How is offside determined in football?
11
Improving 7 vs 7 team and strategy
6
How are tiebreakers determined among teams within an NFL conference?
4
What was format of tennis year-end championships in the past?
7
How do I schedule 12 teams in a championship where 3-4 teams play at the same time in a round, while allowing 1 loss to still be the champion?
5
How are the votes on curling shots determined?
1
UEFA European Championship 2020 Group Ranking
2
What is Lionel Messi's, Cristiano Ronaldo's and Diego Maradona's goals per game ratio against european cup/champions league winners?