Could Wilt Chamberlain dunk from the free throw line?

I have read in this ESPN article that Wilt Chamberlain could dunk the ball from the free throw line.

Did he really do that? Is there any proof of him actually doing so?

After watching many Wilt Chamberlain dunk compilations and reading many articles on The Big Dipper, I can say with a large degree of certainty that Wilt Chamberlain was able to dunk the ball from the free throw line.

For the second question, if by "proof" the OP means "video evidence" then I'm afraid it simply cannot be found if it even exists.

On the other hand, in terms of proof, a strong case can be built that Wilt Chamberlain was able to dunk from the foul line via Witness Testimony and Wilt's Self Proclamation.

On November 28th, 1956 the "Toledo Blade" (a Northwestern Ohio newspaper) published this article which details the "Big Seven" conference's 2 rule changes based on then sophomore Wilt chamberlain: 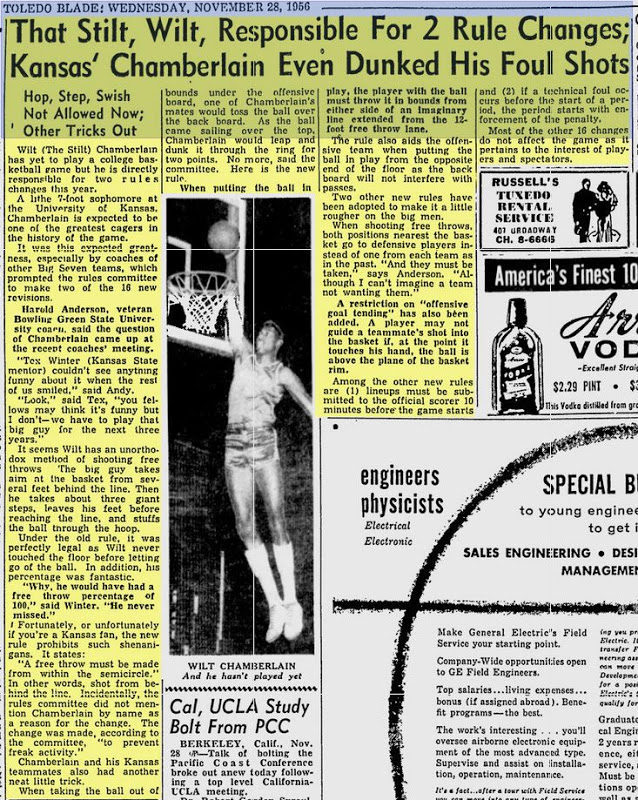 The article is based on a source-less example which narrates Chamberlain's "unorthodox" free throws:

"The big guy takes aim at the basket from several feet behind the line. Then he takes about three giant steps, leaves his feet before reaching the line, and stuffs the ball through the hoop."

Tex Winter (a rival coach at Kansas state) seems to affirm Wilt's ability to dunk from the foul line by stating:

"Why, he would have a free throw percentage of 100." said Winter. "He never missed."

On top of this statement, Winter also lays out the sequences of Chamberlain dunking from the foul line as an eyewitness at approximately 3:50 in this video

Wilt himself even confirmed stories of himself dunking from the foul line when on February 12,1989 in a Los Angeles Times piece, Wilt is quoted saying:

" When I was a freshman, I fooled around with shooting free throws this way: For some reason, I thought you had to stay within the top half of that free-throw circle, so I would step back to just inside the top of the circle, take off from behind the line and dunk. They outlawed that, but I wouldn't have done it in a game, anyway. I was a good free throw shooter in college."

So, based on these witness testimonies and confirmation of them by Wilt himself, we would be with good reason to believe that Wilt Chamberlain was able to dunk from the foul line and did.

Apparently, the only instance in which he dunked a free throw in a public setting came in December 1955, during the annual scrimmage between his Kansas freshman team and the Jayhawks varsity. The NCAA changed the rules before he could do it in an official game.

Not the answer you're looking for? Browse other questions tagged trivia basketball or ask your own question.

13
Has a team ever lost on purpose to get better draft picks?
0
Reaching Violation VS. Charging Violation
4
At what level did Xabi Alonso play Gaelic football?
7
Shooting at the wrong hoop beyond the three point line
1
Are there instances of batsmen walking despite a lack of appeal from the fielding side?
1
How does one team “enter the bonus” in an NBA game
4
Free-throw lines length
4
What is the definition for second chance points in the NBA?
2
Why does a basketball ref raise the second arm when a 3-pt shot falls?
0
Can you goaltend a shot that won't count?