How can a touchdown catch be made when the receiver lands outside the End Zone?

Why was this catch by Chris Hogan for the Patriots against the Buccaneers, on October 5th 2017, a touchdown, as he caught the ball in the air and landed outside of the End Zone? I thought the catching player had to touch down with both feet?

From a NFL Rulebook Rule 11: Scoring

A touchdown is scored when:

2. a ball in possession of an airborne runner is on, above, or behind the plane of the goal line, and some part of the ball passed over or inside the pylon

Note 1: The ball is automatically dead when it is in legal possession of a player and is on, above, or behind the opponent’s goal line.

And from NFL Rulebook Rule 3: Definitions

Item 1. Player in Possession. A player is in possession when he is inbounds and has a firm grip and control of the ball with his hands or arms.

All these rules come into play for the case when the receiver lands outside the End Zone.

Look at this image, (taken from the linked video) 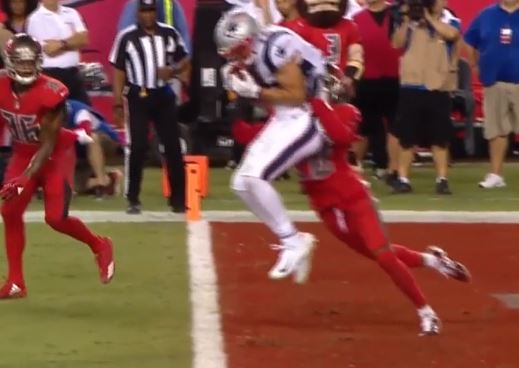 Which shows Chris Hogan is airborne inside the goal line, and ball is also inside the pylon which makes it a touchdown.

And from linked note, ball becomes dead in a legal possession of a player above the opponent’s goal line. He also has a firm grip and control of the ball which makes it a legal possession. So, it doesn't matter where he lands (as long as he is in bounds), that's why the catch is legal touchdown.

Not the answer you're looking for? Browse other questions tagged nfl scoring or ask your own question.

12
On an onside kick, what happens when a return man signals fair catch and is obstructed from reaching the ball?
10
Requirements for Touchdown Catch Near the Goal Line
7
Is there any guideline the NFL uses to refrain from calling a penalty due to unusual celebrations or mass reactions?
6
Is there a minimum number of players needed on the field in the NFL?
3
What rules govern touchdowns/touchbacks if there is a fumble involved?
2
When did the NFL move the stanchion out of the end zone?
5
When calculating red zone efficiency, does a team need to have a first down in the red zone?
6
Why TD when recovered on ½-yard line and "momentumed" to the end zone, in American football?