What is the meaning of “Points” in ICC rankings?

Today I check the ranking of test cricket. 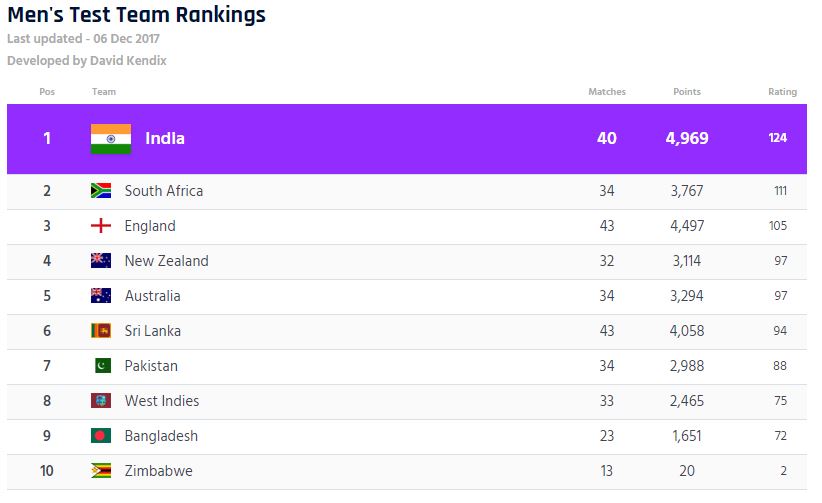 What is the meaning of points, as Sri lanka have third highest point however they are 6th ranked team?

The points are the raw accumulation of marks from the ranking system. Since teams only win points, not lose them, teams which have played more matches will tend to have more points, even if they've also lost more matches. This point score is then averaged by dividing through by the number of matches to provide the rating.

As explained by another page on the site, the points gained are are a combination through a mathematical formula of the results of the matches in a series and the relative strength of the teams, so that a team gains more points for beating a high rated team than a low one. This is similar to the Elo rating scheme developed in chess and now being applied to other sports.

The precise scheme (from Wikipedia) is

The ratings points awarded are then:

If teams rating difference less than 40:

The ratings points for the weaker team equals:

Not the answer you're looking for? Browse other questions tagged cricket ranking or ask your own question.

10
How do the leading makes of red cricket ball vary in performance?
16
How does FIFA rank national teams?
10
How can a player have more points in race rankings than in the ATP world rankings?
11
What tie-breaker is used in the ATP ranking, when two players have the same number of points?
4
Bad light issue in ODI Cricket
5
Climber or Points rankings leader not finishing Tour de France
3
Why did match referee award the 1996 Cricket World Cup Semifinal to Sri Lanka 'by default?''
6
In Tennis rankings what does 10+45 mean in terms of getting ranking points?
2
Where do fractional points in UCI ranking come from?