Scores of men's vs. women's teams

In some sports, two teams compete against each other for a set amount of time (e.g. soccer, basketball) or another fixed quantity (like baseball). In those sports, do men's teams score more points on average (against each other) than women's teams, or vice versa? Or is there not any noticeable difference?

For example, take the last editions of the FIFA (soccer) World Cups for women:

The women score more goals per match than their male counterparts. Is this common throughout football, or just a coincidence? And how about other sports?

If there are any sports where women's matches last longer/shorter than men's, e.g. 30 minutes instead of 40, I'd expect the statistics to compensate for that; it's really the 'goals per minute' that I'm after.

In soccer it's due to the much bigger difference between the best teams and the others. While in men's world cups it's kinda rare to outscore a team by 5-6 goals it's even likely for the women to outscore an opponent by 10 goals. In competitions with more equal teams you won't see that many goals anymore.

The following chart shows the difference of goals per match for the German Bundesliga. Last year the men even scored more, while the female teams' performance difference was on an equal level (Thanks to the Hamburger SV taking beatings regularly). Unlike the men's league the women's league always has one or two teams getting beat up badly, thus increasing the statistics. (13/14 it was Sindelfingen with 4:123 goals, which led to the 3,95 goals per match) 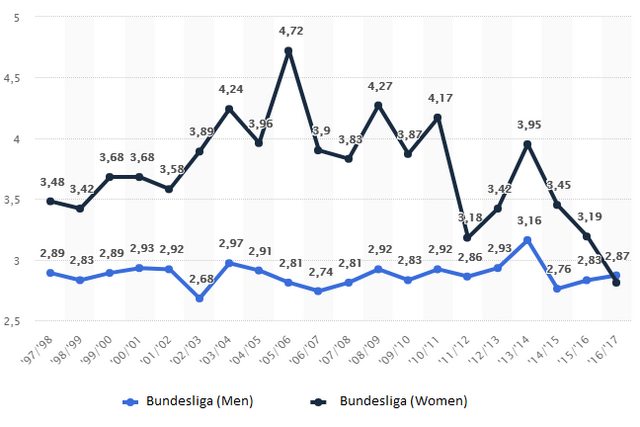 If you look at handball you won't see a difference that big. This is because the teams are not that different. You still have the best regularly beating the not-so-good teams, but the difference between men and women is gone.

For example last year's record of goals per match from Germany:

So it's no general "problem" of the gender. It just depends on the performance difference within a competition.

This seems like a really broad question since there are many, many sports (and, in some, lower scores are better, e.g. golf or race times.)

Baseball was also mentioned, but it's unusual to have women's baseball leagues (at least here in the U.S.,) so there probably aren't meaningful numbers to compare for baseball. Women's leagues typically play softball instead of baseball (or, again, at least this is the case in the U.S.)

8
Is football's (soccer's) popularity in the US increasing?
6
Tie breaking in association football championships
7
Why does the Australian soccer team compete in the Asian qualifiers for the World Cup?
41
Can a football team force its defeat, e.g. via own goals?
1
Which female football players have highest goal per game ratio for national team?
7
Is Ajax the first team not to qualify for the next stage (because they ended up 3rd) with as much as 10 points?
3
Game losing goal
2
What is Lionel Messi's, Cristiano Ronaldo's and Diego Maradona's goals per game ratio against european cup/champions league winners?