What is the maximum advantage from first to last qualified in a FIS slalom first half?

What is the maximum delay with a skier is qualified for the second half in a slalom race?

Today (2018 Jan 3rd) at Zagreb ladies Slalom Mikaela Shiffrin is leading 4"61 on the last qualified (Moellg and Truppe ex equo), is this a record in FIS Alpine Ski World Cup? 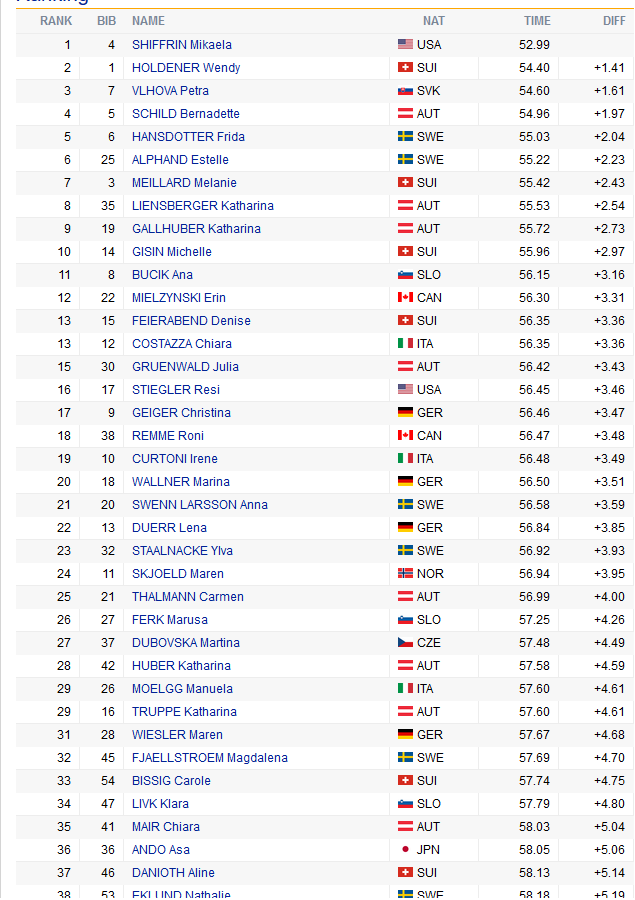 As far as I can tell, there is no such limit. The official Rules for the FIS Alpine Ski World Cup define only:

Limitation for the 2nd run (Slalom / Giant Slalom / DH): Only the first 30 competitors from the 1st run are qualified. This limitation is not valid for the Alpine Combined (see art. 9.5.1).

(And as noted, the Alpine Combined does not have even that limit:

All competitors who complete the 1st run correctly have the right to start in the 2nd run.

I did not find any more stringent criteria. The more general International Ski Competition Rules define the following for slalom races (and similarly for the other race types):

806.2 Limitations in the Second Run

The Jury has the right to reduce the number of competitors for the second run to half on the first run start list. The decision has to be made no later than one hour before the start of the first run.

But again, no specific time limit.

However, note that competitors who have more than 108% of the total time of the winner will receive no World Cup points:

10.2 Time difference from the winning time

If a competitor's overall time (at combined events the total running times of both events counting for the Combined) is more than eight (8) percent greater than the winning time, irrespective of the rank achieved, no points will be awarded

Not the answer you're looking for? Browse other questions tagged records skiing or ask your own question.

14
What was the fastest 147 break before Ronnie O'Sullivan?
5
How do the penalties work in biathlon?
3
What is the skiathlon?
5
What is the MLB record for the most errors by a single player on a single play?
4
Is the classic alpine combined used as a skiing discipline or now all drive super combined?
3
Which nation has the most men's wins in a single Alpine Skiing World Cup season?
1
Which tennis number one played the fewest tournaments in a year?
5
What is the record for winning a Formula 1 race by leading least number of laps?
3
Why do skiers use poles in slalom and downhill?
4
Can an athlete with double nationality beat two country records at the same time?