Can time of possession for the two teams of an NFL game add up to less than 60 minutes?

In a December 13, 2015 game between the Atlanta Falcons and Carolina Panthers, the time of possession of the two teams was recorded as:

Adding these two gives a total game time of 59:42, which is 18 seconds short of a full game. Is there an explanation for this? Or is this simply an error in the source data?

Another game I found that has a similar discrepancy:

That is from NFL.com. It's one second short of a full game. Another error in the data?

You haven't added the source of data which may help in clarifying but official NFL website shows the possession of these two teams for this match as: 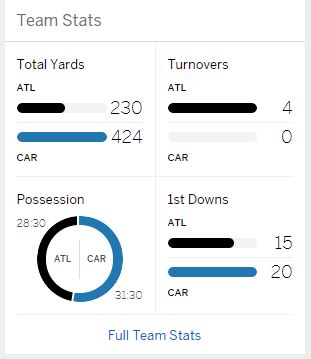 Not the answer you're looking for? Browse other questions tagged statistics nfl or ask your own question.

2
Computing win probabilties for NFL teams
10
How do NFL teams do in their last game if they have already clinched a playoff spot?
7
How does the NFL decide which teams play in London?
4
What is the record for most turnovers by an NFL team that won the game?
1
What does the third number in a NFL team's record stand for?
1
Can a 5-yard penalty be conceded by the defence when the offence is less than 5 yard from the goal line in American football?
0
In the NFL, how have teams fared against odds from Las Vegas?
2
NFL teams with as many or more thrown interceptions than completions in a game
1
Which losing team has had the most possession time?