Which team is mentioned first in the score in NBA games?

Most sports I know of (e.g. soccer) will mention the home team first; e.g. if Barcelona plays Real Madrid in Barcelona, the scoreboard will show

both in the stadium (where the home team is often displayed above the away team) and on television, at one of the edges of the screen.

However, in my (limited) experience of watching NBA, I have often (maybe even always?) seen the away team mentioned first. Most recent example on Dutch television: a summary of Milwaukee Bucks - Golden State Warriors, played in Milwaukee; the scoreboard at the bottom (provided by ESPN) showed GS - MIL, where I expected it would be the other way around. What logic is used to determine which team is mentioned first in the score in NBA games?

The American convention is that the away team is first - you can think of this as "Golden State at Milwaukee". This convention extends to how the fixtures are listed; for example, picking today's schedule from the official NBA site: 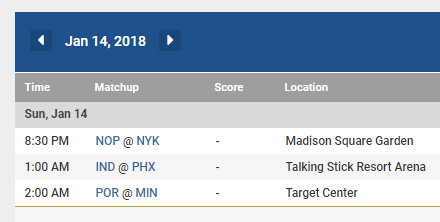 you can see that the fixtures are all listed as "away team (at) home team" (the times listed there are funny because I'm in the UK, so the site has listed UK times). The same certainly applies to the rest of the "Big Four" sports in the USA (NFL, MLB, NHL) and to the college variants of those sports, but I note that the MLS site follows the "European" convention and lists the home team first.

Not the answer you're looking for? Browse other questions tagged nba scoring or ask your own question.

6
Is the convention for reporting football results universal?

8
Fair system to score players between friend games
4
Has there ever been an NBA game in which one team did not score a single three-pointer?
6
Why is music played during NBA games?
2
NBA 7 game playoff series where every game was won by the home team?
2
Which NBA team had the shortest "longest winning streak" in a championship-winning season?
1
How many times an NBA team has won at least 3 consecutive overtime games?