Is this a mistake specifying dimensions in the IFAB laws?

No, this is not a mistake. From Wikipedia article "Football pitch":

Due to the original formulation of the Laws in England and the early supremacy of the four British football associations within IFAB, the standard dimensions of a football pitch were originally expressed in imperial units. The Laws now express dimensions with approximate metric equivalents (followed by traditional units in brackets), but use of the imperial units remains common in some countries, especially in the United Kingdom.

From IFAB 1974 minutes of the annual general meeting: 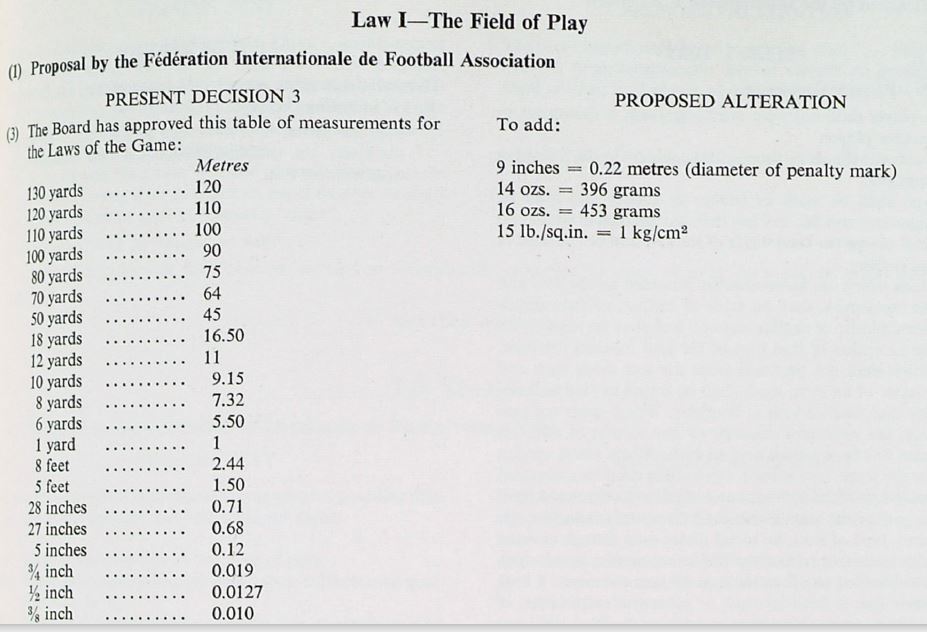 I am not exactly sure when board approved this table of measurement as some meeting files are not available online.

3
Do the laws of cricket allow running on the last ball, even after winning?
6
Are LED stumps allowed by the Laws of Cricket?
3
If an assistant referee commits a mistake in a football game, will he be penalized in any way?
4
Home Nations in IFAB
5
Can the event of kick-off going directly into the kicker’s own goal described in the Laws of the Game ever occur?
4
IFAB: Technical Area, Substitutes
4
Should Jorgensen have been sent off for his DOGSO foul in Croatia-Denmark (2018 FIFA World Cup)?
3
Why is special case of handball above the shoulder allowed under the revised IFAB rules (2019/2020)?