Signal for off-side and indirect free kick in association football

In association football, I'm confused as to how the referee is expected to indicate an indirect free kick at the time of the offence. He spots the offence, blows his whistle, and then he needs to indicate which team is awarded the free kick by raising his arm at a 45° angle pointing towards that team's attacking side. At that point, i.e. way before the kick is about to be taken, does he also need to indicate that the free kick is indirect with an arm raised vertically or does he only indicate indirectness when the kick is about to be taken ? I'm assuming he would not raise both arms at once.

This video didn't make that clear to me. My understanding from this video is that the referee would have his arm raised vertically from the moment he awards the free-kick up until when the ball is played and touched by another player. This makes no sense to me since in the meantime the referee might need to deal with objection or wall-placing, or may simply need to wait for a ball to be provided.

I also have the feeling that when an off-side offence is called, the referee signals it differently from other indirect free-kick offences. I can't find a video on Youtube where the referee is actually on the screen at the moment the off-side is called, but I seem to remember that they immediately raise an arm vertically, without indicating which team is awarded the free-kick. Granted, if it's an offside, then there's no confusion. But I'm pretty sure that in other cases, like in an obstruction offence, the referee would indicate which team it goes to, and indicate indirectness later on ?

Your video pretty much explains how you do it in regular situations and the Laws of the Game provide the same info (link):

The referee indicates an indirect free kick by raising the arm above the head; this signal is maintained until the kick has been taken and the ball touches another player or goes out of play.

An indirect free kick must be retaken if the referee fails to signal that the kick is indirect and the ball is kicked directly into the goal.

There are always situations where you will need your arms to handle complaints by the players or any other situations preventing the kick to be taken (subs, cards, etc.). In that case you need to handle that first and raise your arm when you're ready to resume the game. For example if you blow the whistle to stop the game to show a card or after you awarded the free kick and have to handle any other problems...

Offside signals may be different from the usual indirect free kick signals.

Our referees are indicating offside by raising the arm (for indirect fk) and waving the other arm in front of them in a line parallel to the goal line. This plus the linesman's flag signal is sufficient to signal offside offenses. 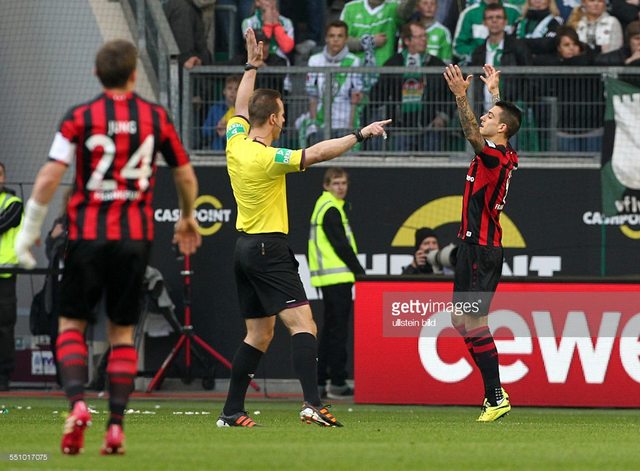 Not the answer you're looking for? Browse other questions tagged football officiating or ask your own question.

3
Simultaneous Fouls
7
Quick free kick prevented by opponent
5
What happens if an own-goal is scored during a delayed penalty shot (ice hockey)?
9
What happens when fouled behind the goal line near the penalty area?
3
In football, what happens when a team commits an offence for which play need not be stopped, and then scores a goal immediately after?
4
Should Jorgensen have been sent off for his DOGSO foul in Croatia-Denmark (2018 FIFA World Cup)?
2
Why does a basketball ref raise the second arm when a 3-pt shot falls?
3
Why is special case of handball above the shoulder allowed under the revised IFAB rules (2019/2020)?
1
How long does advantage last in football?
3
From how deep in the corner can a free kick be spotted?