Why are there stickers on the back helmets of football players ? Are they badges for recognition?

Do all players start the season with a «clean slate» helmet or do stickers remain for a second or third season?

For more then 40 years Helmet stickers used to signify achievements in college football. 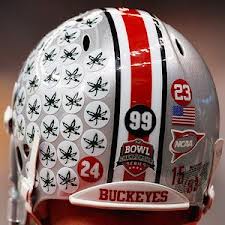 In 1965, Miami University in Ohio became the first school to award college football helmet stickers.
The idea originated with assistant coach Jim Young. As a former World War II fighter pilot, Young recalled the practice of putting small
enemy flags on his plane every time he shot down a foe.
So he convinced the Miami head coach to award tomahawk helmet stickers for extraordinary plays.

The interesting question is How do college football players earn helmet stickers?

The criteria for those stickers vary between schools, for the majority it is awarded on outstanding plays during a game.

Here are some examples:

Not the answer you're looking for? Browse other questions tagged american-football collegiate helmet or ask your own question.

4
Why don't bobsleigh drivers customise their helmets like racing drivers do?
3
Why do athletes need help standing up?
3
Why are CFB polls so week-to-week compared to NFL's power ranking style?
10
What made Notre Dame, Notre Dame?
3
How can you toughen up your foot for barefoot kicking?
4
What is the significance of the 20 yard line?
3
Why are WR in the slot covered by non-CBs in American football?
3
Do NCAA College Football athletes have to provide their own helmets?
6
Is there such a thing as an ineligible runner in football?
6
Is there a minimum number of players needed on the field in the NFL?