Which is the most frequently played match in football European Cups?

According to this source Juventus and Real Madrid have played 19 times in the past. In quarter-finals of the 2017/18 UEFA Champions League they will play two more times for a total of 21. So,

What is the most frequently played match in European Cups?

The most frequently played match in European Cups is Bayern Munich Vs Real Madrid they have met 24 times up to now.

Bayern and Real Madrid have met 22 times previously in the European Cup, ...

No fixture has been played more often in the Champions League or European Cup than this one. Wednesday’s game will be the 23rd meeting, and the 21st in the knockout stage.

This match will be the 23rd time both sides face each other, making it the most played match-up in the UEFA.

Other: Bayern Munich vs Real Madrid is most played game in Champions League history

Results of past matches: Source Other 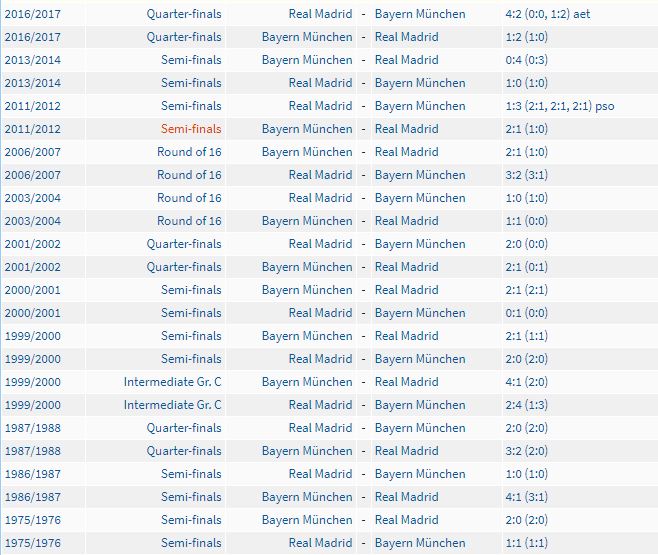 Not the answer you're looking for? Browse other questions tagged football trivia history records uefa or ask your own question.

5
Why is Russia considered a tricky destination for European football cup ties?
3
Who is the football player who won the most official international titles?
10
Which is the fifth in the Big Five of European football leagues?
6
Was Cristiano Ronaldo's 100th Champions League goal offside or not?
2
Why doesn't UEFA allow other official matches at the same time as their own competitions?
3
Longest participation streak in European football competitions
4
Which team has scored the most goals during the group stage of a single UEFA Champions League?
2
What is Lionel Messi's, Cristiano Ronaldo's and Diego Maradona's goals per game ratio against european cup/champions league winners?
0
How many European cup finals have been played in the stadium of one of the finalists?