What factors do I need to take into consideration for reading greens?

What factors, beyond slopes (left, right, up/downhill), do I need to take into consideration for reading greens?

I chipped in from off the green for my first birdie in my life (several years ago). However, I was surprised my chip had a chance let alone went in.

While I was reading the green, I was led to believe that the undulation of the knob in front of me (see pic below) would feed the ball to the left at its mid-point, and I had slightly pulled the ball left of that. Nonetheless, the ball landed, broke to the right, and found the bottom of the cup. 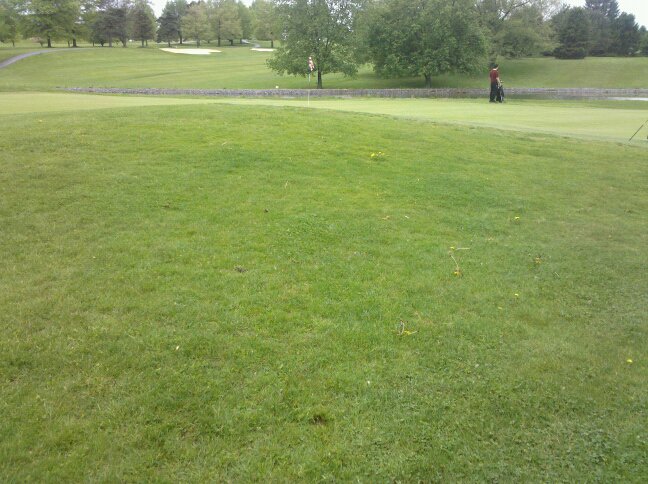 View of my chip shot below. The pitchmark at the bottom of the pic was where my ball lied. The mid-point was slightly left of the flag, just about left of the lowest tree branch in the background.

The Grain of the grass This is the direction that the grass lays. If you have to put across the grain of the grass you can find that the ball moves off line even though it is very flat. The movement isn't usually much but an inch over 20 feet can result in quite a few missed puts.

Condition of the green. If there are areas of uneven grass growth, places where the green has been repaired with sod, ball marks. If one or more of these is in the line of your putt you can have unexpected movement. You can repair ball marks and green damage in your line.

(i) the player may remove loose impediments, provided he does not press anything down (loose impediments may be removed by any means, e.g. with the putter head, a glove, the back of a hand, or even with a brush!)

(ii) the player may place the club in front of the ball when addressing it, provided he does not press anything down (this is a practice sometimes used by players as part of their putting routine)

(v) in pressing down a ball-marker

(vi) in repairing old hole plugs or ball marks on the putting green - Rule 16-1c (but remember that no other damage to the putting green may be repaired on the line of putt, e.g. spike marks or flagstick damage)

(vii) in removing movable obstructions - Rule 24-1 (remember that if you accidentally move your ball while removing anything from the putting green, whether it is natural or artificial, there is no penalty and the ball must be replaced, Rules 23-1 and 24-1a).

Given that picture and your intended putting path, I would have expected the ball to break right all day. The peak of that rise is about double the radius of the branches of the tree nearest the pin, so the midpoint of your bump and run is to the right of that peak and so it'd break right. How much depends on the speed the ball is travelling, whether it's rolling or still bouncing at the midpoint, and other factors of the green.

Chad's answer has the two main things besides slope that determine the proper putting line for a shot; the grain of the grass, and the presence of any imperfections.

Grain is, quite simply, the direction in which the blades of grass grow. This depends on the species of grass, the location and orientation of the green relative to the path of the Sun, prevailing winds, and other factors (including the exact area of the green; it can change from one side of the green to the other). The best greens have no grain; the grass used grows straight up. But, most of those are high-maintenance grasses, and so most of your public and even semi-private courses, especially in southern climates where drought-tolerance is a plus, use something a little hardier that results in a grain. A putt directly against the grain will require more power than a putt with the grain, and putts will tend to break slightly in the direction of the grain, especially in the second half of their path as they slow to a stop, or when putting on a line within about thirty degrees of being directly with or against the grain.

In addition, greens that have been recently maintained often have rake furrows produced by the process of relevelling or thinning the green, which will give a more pronounced grain to the green surface.

Beyond the grain, the next most important thing is the softness or firmness of the ground under the grass, which is a primary determinant of the green's speed. The basic soil type, moisture content, and the amount of sand the groundskeeping staff have used to level it all contribute. The softer, the slower. The other primary determinant is overall grass height; most greens are kept close-mown, as short as 3/4". The taller, the slower, and the more pronounced the grain's effect.

7
What is the proper etiquette when a playing partner is searching for his/her golf ball?
1
What are some tips for green-reading?