Hasn't Kasper Schmeichel broke the rules when saving Modrić's penalty during the World Cup 2018, Round of 16 match between Croatia and Denmark?

The defending goalkeeper must remain on the goal line, facing the kicker, between the goalposts until the ball has been kicked.

However, from the image below, it's obvious that Schmeichel left the goal line before Modrić touched the ball. 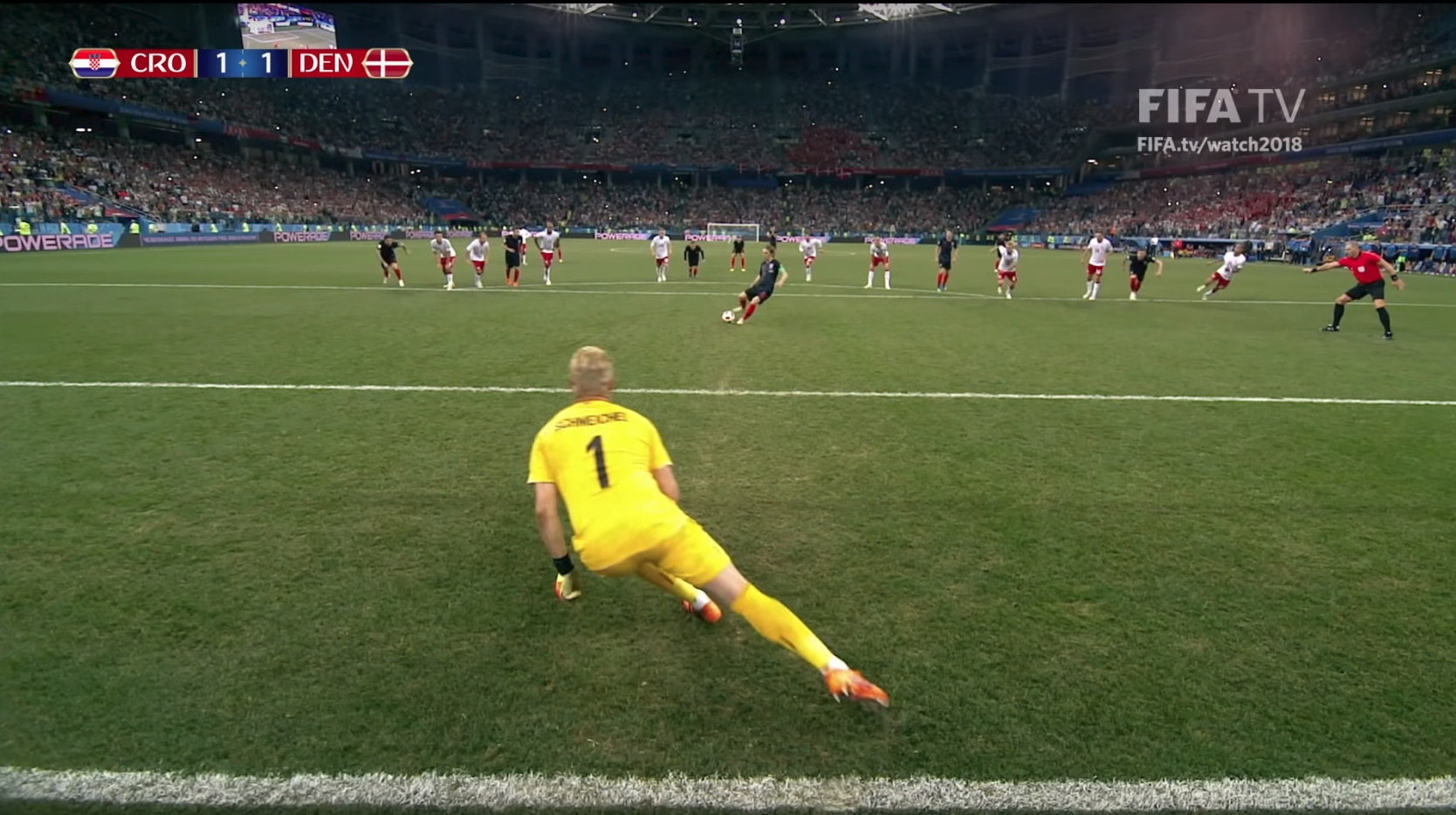 Wasn't the referee supposed to caution Schmeichel and and call a retake according to Law 14 - The Penalty Kick - Offences and Sanctions?

If, before the ball is in play, [...] the goalkeeper or a team-mate offends:

With the introduction of VAR, this offence had to be immediately noticed. Why referees are so merciful to the offending team when goalkeepers don't respect the penalty procedures? This type of offence occurs quite often in the game and I don't understand why referees tolerate it.

There are likely two possible reasons this technical breach of the Laws was not penalised.

The change in 2017 to mandate a caution for any goalkeeper infringement that results in the retaking of a penalty kick has made referees far more reluctant to penalise this offence, given that doing so now has a massive effect on the game.

As mentioned in the other answer, VAR would not intervene here, as only goals, offences resulting in the awarding of a penalty kick, direct send-offs and mistaken identity are reviewable. Curiously enough, if a goal had been scored and the attacking team had encroached by entering the penalty area or penalty arc before the kick was taken, this would be reviewable (if seen to be a clear and obvious error).

He leaves the goal line right when the shot is taken. This is quite normal behavior and accepted by the referees. It is very hard to see and the referee also has to watch the other players when they try to go after the ball too early, which makes it even harder. 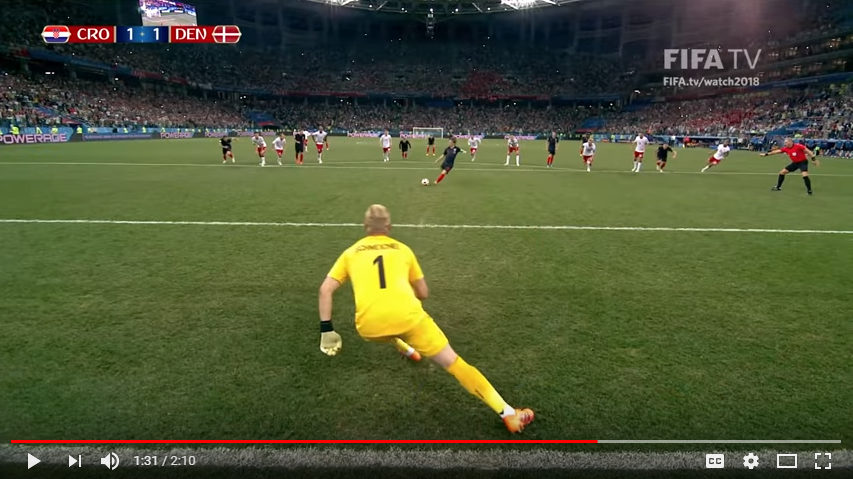 While he's not standing exactly on the line (which is tolerated to some extent.. the referees don't blow the whistle for every inch and from his position he probably didn't even see the small space between Schmeichel and the goal line) he's jumping forward like 1/100 before the kick.

That's nothing the VAR should interfere with. They're only there to interfere with blatantly wrong decisions or the "big four", not to have any bad call overthrown. In this situation it is very close and not blatantly wrong. A goal would have been reviewed, but that would have saved Kaspar Schmeichel anyway, because of the Law you've mentioned ("if the ball enters the goal, a goal is awarded").

Yes, it's an illegal position by a few inches.
No, it's nothing for the VAR to review.

Not the answer you're looking for? Browse other questions tagged rules football world-cup penalty-shot video-review or ask your own question.

7
Are you allowed to score a goal off the ground with your head to showboat?
10
Could a player be in an offside position off the field of play?
9
What happens when fouled behind the goal line near the penalty area?
4
Why goalkeepers usually don't guard at the near post during free kicks?
3
In football, what happens when a team commits an offence for which play need not be stopped, and then scores a goal immediately after?
4
Should Jorgensen have been sent off for his DOGSO foul in Croatia-Denmark (2018 FIFA World Cup)?
4
Why do referees suddenly care so much whether or not the goalkeeper has a foot on the goal line during a penalty kick?
3
From how deep in the corner can a free kick be spotted?
4
Why is the ball hitting any part of the arm now a handball?