10 players in World Cup history have won the Champions League and World Cup in the same year.

With Real Madrid's Raphael Varanae of France, and Luka Modric & Mateo Kovavic of Croatia in the final, there is guaranteed to be an 11th. 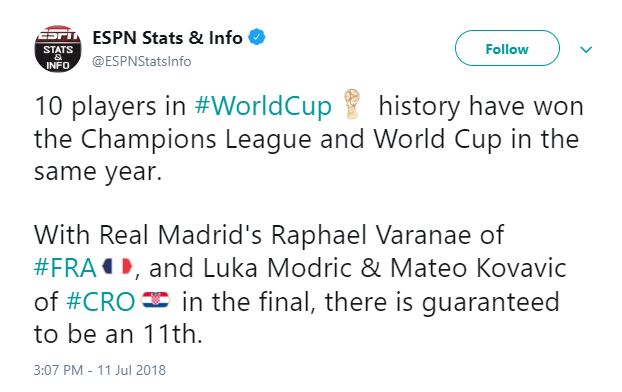 So, who are the 10 players who have achieved this feat previously?

Also, how many and who are the players that have won Copa Libertadores and a World Cup in same year?

There are 11 players who have won the Champions League (including the European Cup) and the World Cup in the same year:

There are 10 players who have won the Copa Libertadores and the World Cup in the same year:

Not the answer you're looking for? Browse other questions tagged football trivia world-cup champions-league copa-libertadores or ask your own question.

7
How many times two teams from the same continent have played the World Cup Final game?
8
Which players won both FIFA U-20 World Cup and FIFA World Cup?
2
Which players won both junior and senior IIHF World Championships?
3
Who is the football player who won the most official international titles?
4
All European World Cup semifinal
10
Lowest ball possession in the final match of the World Cup
1
What NBA players have won both Defensive Player of the Year and Most Valuable Player?
4
Why do referees suddenly care so much whether or not the goalkeeper has a foot on the goal line during a penalty kick?
0
Who was chosen the best soccer player of the 1958 world cup, Didi or Raymond Kopa?