Should Jorgensen have been sent off for his DOGSO foul in Croatia-Denmark (2018 FIFA World Cup)?

I am of course referring to the foul that occurred at the 113th minute of the round of 16 match between Croatia and Denmark, when Rebić would have scored an easy goal had he not been fouled in the box by Jorgensen: 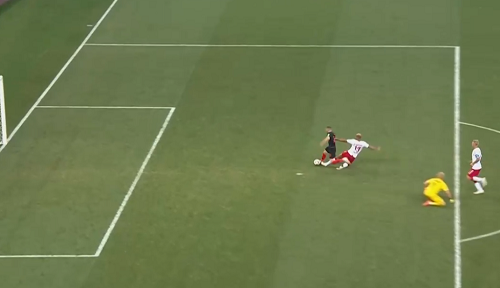 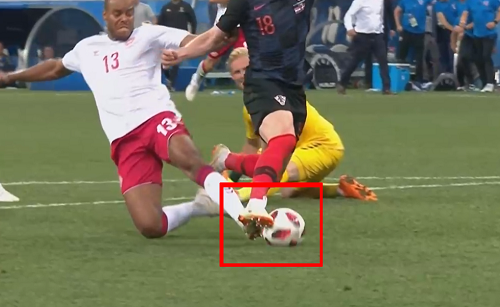 Yet the point I'm trying to make is different. Is the fact Jorgensen was trying to get the ball enough to downgrade the red card to a simple yellow card in this case? People who agree with the referee's decision end up quoting this part of the 2018/19 Laws of the Game (Law 12, p. 108):

Where a player commits an offence against an opponent within their own penalty area which denies an opponent an obvious goal-scoring opportunity and the referee awards a penalty kick, the offender is cautioned if the offence was an attempt to play the ball; in all other circumstances (e.g. holding, pulling, pushing, no possibility to play the ball etc.) the offending player must be sent off.

But read it carefully: this paragraph is only referring to situations where an obvious goal-scoring opportunity is denied. To see why this is important, let's have a look at what the rulebook says just one page earlier:

A player, substitute or substituted player who commits any of the following offences is sent off: (...) denying a goal or an obvious goal-scoring opportunity to an opponent whose overall movement is towards the offender’s goal by an offence punishable by a free kick (unless as outlined below)

As you can see, the rule is actually about two distinct situations: denying a goal OR an obvious goal-scoring opportunity. It is also clear that 'denying a goal' doesn't only occur when a player deliberately handles the ball on the goal line, because

Now, as the first image clearly shows (and as everyone who has watched the match knows), the goal was empty (the goalkeeper, Schmeichel, was almost outside the penalty area): a tap-in would have been enough for Rebić to score a goal. And seeing how the Laws of the Game do make a distinction between

...well, then it looks to me that this is the clearest example of what 'denying a goal by fouling an opponent' should be.

So, why did the referee apply that special provision of Law 12 that allowed him to only give a yellow card to Jorgensen, when this exception is only valid in situations when an obvious goal-scoring opportunity is denied?

So, was cautioning Jorgensen a mistake under the current Laws of the Game? Or are there any other official rules/interpretations that justify a yellow card and that I'm unaware of?

This is simply an editorial oversight.

The full text of the sending-off offence you are referring up until the current (2018/19) edition of the Laws was:

This was changed to (emphasis added):

The first part of the explanatory text further on has not changed since it was introduced in the 2016/17 edition:

Where a player commits an offence against an opponent within their own penalty area which denies an opponent an obvious goal-scoring opportunity and the referee awards a penalty kick ...

If a player either denies a goal or obvious goalscoring opportunity by committing an offence punishable by a free kick as part of an attempt to play the ball, and this results in a penalty kick being awarded, the player is cautioned for unsporting behaviour instead of being sent-off. In all other cases e.g. pushing, pulling, holding, no possibility of playing the ball, deliberately handling the ball, other misconduct (i.e. entering the field of play without permission), the player is sent-off.

You can't "deny a goal" in this situation because the ball is not even close to entering it; Rebic is still regathering the ball after beating the goalkeeper and hasn't yet beaten the challenge from Jorgensen, and a shot hasn't been taken yet.

There are more than enough incidents where a player has been able to walk the ball into the six-yard box and could have walked it into the goal and still missed. To call this particular situation "denying a goal" would be wrong.

Once you accept that even a situation where the attacker is extremely likely to score is still only the denial of an obvious goal-scoring opportunity, the remainder of the analysis is moot and the answer is clear.

Jorgensen did attempt to play the ball. He fouled Rebic and therefore a DOGSO occurred. According to the laws, this is a penalty kick and a caution (yellow card). The correct decision was made.

Not the answer you're looking for? Browse other questions tagged rules football world-cup or ask your own question.

2
Has there been any punishment for taunting opponents in a top division football game?
5
Player looses boot after tackle
3
When advantage is played on a DOGSO situation, and a goal is scored, should the offender always be cautioned?
10
Could a player be in an offside position off the field of play?
7
Can a player receive a direct red card after receiving the second yellow card?
3
In football, what happens when a team commits an offence for which play need not be stopped, and then scores a goal immediately after?
10
Hasn't Kasper Schmeichel broke the rules when saving Modrić's penalty during the World Cup 2018, Round of 16 match between Croatia and Denmark?
3
What happens if a player who has been cautioned during the match gets a second yellow card while kicks from the penalty mark are being taken?
5
In football, how should the referee deal with possible offside situations involving attacking/defending players off the field of play?