YouTube recently gave me some video suggestions that I watched. Basically, it was the worst draft picks of all time, worst #1 picks, best underrated draft picks, etc. Is there any statistics that show high draft picks improve a team in the short and/or long term?

Ive been googling, but I cant find anything. Maybe Im using the wrong search terms.

Picks in higher rounds do better by staying in the league longer, starting more, and being more likely to be Pro-Bowlers.

According to forbes.com, of starters in the NFL in 2014,

Nearly 30% of all starters were 1st round draft picks when drafted into the league; 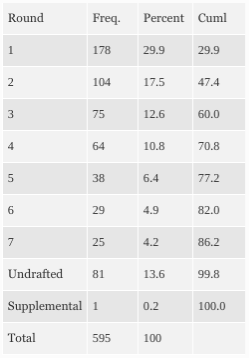 -The overall median “percentage of games started” by those players selected in the 2010 NFL Draft is 15%;

-1st round draftees from that season started a higher median percentage of games (67.5%) compared to players drafted in other rounds;

-2nd and 3rd round draftees from 2010 have started roughly 34% and 36% of all possible games, respectively.

-The median percentage of games started for players drafted in rounds 4 through 7 from the 2010 draft was extremely low, never rising above 7% of games played over the last 5 years. 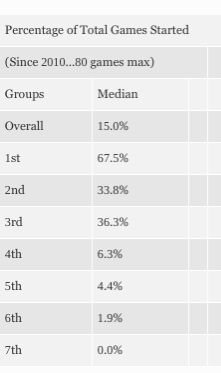 -48.5% were first round draft picks when they entered the league;

-2nd round picks were the next most likely to reach All-Pro status (14%);

-But then undrafted players were the third most likely at 10.5%; 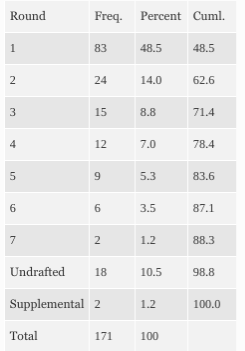 Not the answer you're looking for? Browse other questions tagged statistics draft or ask your own question.

3
Do any professional sports leagues which have drafts use a snake draft format?
6
How do College Drafts work?
1
How often does pulling the goalie work?