Why not open up the table when it is snooker-friendly?

Below is shown a position from the famous Fu-Day game of snooker in which Day achieved four snookers. This was aided by the snooker-friendly condition of the balls in a cluster at the end of the table, allowing the cue to be hidden.

Why would Fu not clear the cluster by hitting the brown/green to the side of the table? Obviously it will be a foul, but he would only take one foul penalty and it would make it a lot harder for Day to hide the cue after that. 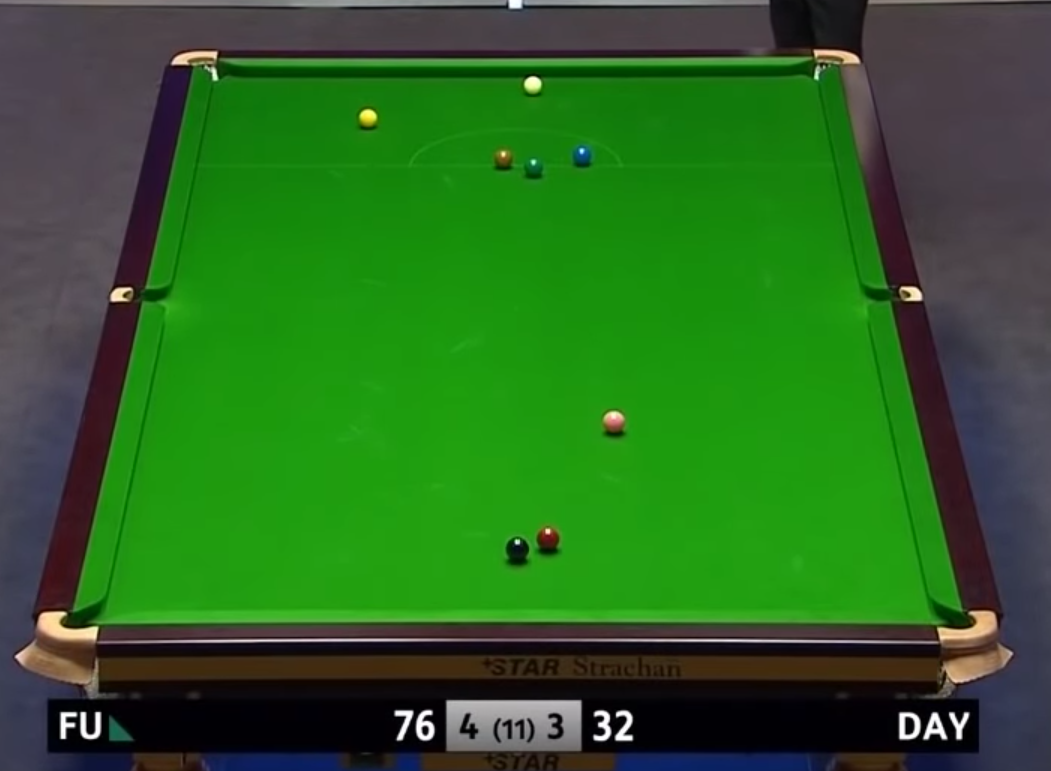 In most situations, not attempting to hit the ball "on" would be a "Foul and a Miss" and the opponent would have the option of having the balls reset to the position before the shot, rendering this tactic worthless:

The striker shall, to the best of his ability, endeavour to hit the ball on or a ball that could be on after a Red has been potted. If the referee considers the Rule infringed, he shall call FOUL AND A MISS

After a FOUL AND A MISS has been called, the next player may request the offender to play again from the position left, or at his discretion, from the original position, with all balls being replaced

(Official rules, Section 3, Rule 14 Foul and a Miss). However, my reading of Rule 14 is that "Foul and a Miss" cannot be called if snookers are required:

If the referee considers the Rule infringed, he shall call FOUL AND A MISS unless:

(i) any player needed penalty points before, or as a result of, the stroke being played;

so Fu could perhaps have done this. On the other hand, there is Section 4, Rule 1:

In the event of:

the referee has the option of awarding the frame to the opponent. I don't know what counts as "wilfully unfair" for world class players.

Not the answer you're looking for? Browse other questions tagged snooker or ask your own question.

5
Why isn't a foul on the red at least 8 points in Snooker, when playing on a colour?
4
What prevents players from nursing the balls in snooker?
4
Why do snooker breaks show more ball activity than decades ago?
3
Has anyone hit the wrong color ball in an important snooker match?
4
Why not use a snooker cue on a standard pool table?
3
What happens after the penalty if a player is snookered behind a free ball?
2
How is an L77 pool/snooker table bumper mounted to the rail?
1
What recourse does a player have when a referee makes a scoring mistake in snooker?